Update Required To play the media you will need to either update your browser to a recent version or update your Flash plugin.
By Mario Ritter Jr.
06 July 2020

The sites are believed to be 7,000 years old. The area where they were found was once dry land.

Archeologists say study of the hundreds of found objects will increase understanding of the culture and technological development of Australia's aboriginal people. 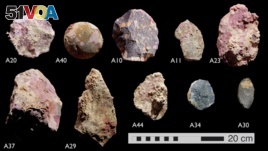 The two ancient sites are now underwater in the Dampier Archipelago island group. Divers from Flinders University in Adelaide, South Australia, made the discovery.

The area was already well known for its rich ancient history and its rock-art carvings. However, the two sites are the first confirmed underwater places holding evidence of human civilization in Australia and the area around it.

Michael O'Leary is a marine geoscientist and co-director of the project to study the tools. He told Reuters that his team wants to study "the skill, the technology, how they made these tools, to see if they represent a different cultural approach to tool making that we haven't yet identified in Australia,"

Archeologist Jonathan Benjamin also leads the project. He said the scientists have found cutting and grinding tools that are thousands of years old.

"You can start to recreate what the people were doing and how they were making their life way in their economy," Benjamin said.

Information from the discovery is being studied to find out how old the objects are. However, the radiocarbon dating method and study of sea-level changes show the areas are at least 7,000 years old.

Benjamin said the majority of objects remain on the seabed. The ones taken have been scanned for further research. They will then be given to the indigenous landowners, the Murujuga Aboriginal Corporation.

archeological –adj. related to archeology, the study of past human life

site –n. a place where something was in the past

aboriginal –adj. related to the native people of Australia

carvings –n.(pl.) objects that are cut from stone or wood

civilization –n. a condition in which people have developed effective ways to organize and live as a society

grind –v. to make something sharp by rubbing it against a hard surface

scan –v. to use a machine to make a digital image of something for study or reproduction