Update Required To play the media you will need to either update your browser to a recent version or update your Flash plugin.
By Bryan Lynn
05 July 2020


Astronomers say a massive star appears to have mysteriously disappeared from a distant galaxy.

The star is part of the Kinman Dwarf galaxy, also known as PHL 293B. The galaxy is about 75 million light years away from Earth. It sits in the constellation of Aquarius. A constellation is "a group of stars that forms a particular shape in the sky," the U.S. space agency NASA says.

Images of the Kinman Dwarf galaxy were captured in the past by a camera attached to NASA's Hubble Space Telescope. But since the galaxy is so far away, researchers have not been able to clearly observe its individual stars.

Astronomers had, however, identified important "signatures," or signs, that the massive star existed. Now they are searching for answers about why these signatures can no longer be seen.

A team of scientists from the European Southern Observatory reported it had been observing the star with its Very Large Telescope, VLT, for at least 10 years. The observatory, based in Chile, provides astronomy support to European countries.

The team said its observations repeatedly showed evidence that the Kinman Dwarf galaxy contained the massive star, estimated to be about 2.5 million times brighter than our sun.

The project's leader was Andrew Allan, a doctoral student in astrophysics at Ireland's Trinity College Dublin. He led a study on the findings, recently published in Monthly Notices of the Royal Astronomical Society.

Allan said the researchers wanted to learn more about how massive stars end their lives. The massive object observed in the Kinman Dwarf galaxy seemed like the perfect target.

But when astronomers turned the Very Large Telescope toward the distant galaxy in 2019, they could no longer find any signatures of the massive star. "Instead, we were surprised that the star had disappeared," Allan said in a statement. 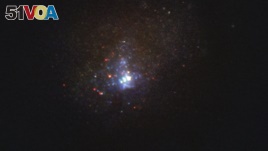 The Kinman Dwarf galaxy, also known as PHL 293B, taken with the NASA/ESA Hubble Space Telescope's Wide Field Camera 3 in 2011, before the disappearance of the massive star. (Image Credit: NASA, ESA/Hubble, J. Andrews (U. Arizona)

"It would be highly unusual for such a massive star to disappear without producing a bright supernova explosion," Allan said.

NASA describes a supernova as an "extremely bright, super-powerful explosion of a star." A supernova takes place at the end of a star's life.

The astronomers are now exploring two possibilities. The first is that the star might have become less bright and could be partly blocked by dust. The other possibility is that it collapsed into a black hole without producing a supernova.

If the star did collapse into a black hole, it would be a highly unusual end, the researchers said. "This would be a rare event: our current understanding of how massive stars die points to most of them ending their lives in a supernova," said a statement issued by the European Southern Observatory (ESO).

Trinity Professor Jose Groh, another project leader, said the astronomers plan to keep observing the galaxy for signs of the mysterious missing star.

"We will likely need to wait a few years before confirming what fate befell this particular star. We will observe the galaxy again with the Hubble Space Telescope next year, which will provide new clues," Groh said.

The ESO also plans to launch observation equipment and is expecting its Extremely Large Telescope to be in operation by 2025.

That telescope should be "capable of resolving stars in distant galaxies such as the Kinman Dwarf," the statement said. The new equipment could also help astronomers solve the mysteries of the future.

Bryan Lynn wrote this story for VOA Learning English, based on reports from the European Southern Observatory and Trinity College Dublin and NASA. Caty Weaver was the editor.

astronomer – n. a scientist who studies stars and planets

particular – adj. used to describe a certain part of something

fate – n. what happens to something, especially something bad

clue – n. a piece of information that helps you solve a problem or answer a questions

resolve – v. to solve or end a problem or difficulty