Update Required To play the media you will need to either update your browser to a recent version or update your Flash plugin.
By Pete Musto
04 July 2020


If everything had gone as planned, Mina Lee would be in Guatemala right now.

The 20-year-old American told VOA the Guatemala trip was part of a program at Princeton University in New Jersey. She began studying history at Princeton in 2018.

But Lee says the coronavirus health crisis completely changed her plans for the rest of this year. Luckily, she already had a part-time job with the technology company GRUBBRR. And the company offered a solution to her problem: a summer internship.

Internships have become increasingly common in the United States and elsewhere in recent years. They provide important work experience to college students. Internships also give students a chance to see what working at a given company is like before they launch their careers.

A growing number of companies have come to expect college students to complete at least one internship if they want to be considered for full-time employment.

Yet the coronavirus has affected the ability of students everywhere to take part in such programs. Studies have shown that half of all internship openings in the U.S. have been cut since the coronavirus started spreading. In Britain, 64 percent of the positions have been cut.

Hundreds of companies, including Airbnb, Fedex, Gap and Disney, have cancelled their summer internship programs, one online database reported. The International Labor Organization noted last month that at least one in every six young workers worldwide has stopped working. The United Nations labor agency says the long-term effects of the health crisis could lead to a "lockdown generation" scarred throughout their working lives.

That is why some companies are moving their internships completely online. Amazon is seeking more than 8,000 interns for its summer program. And while many of her friends now have nothing to do, Mina Lee has been able to work for GRUBBRR entirely from her New York home.

"Even if there was a feeling that something was stolen, it's followed by a feeling of ... excitement for what's going to come next," Lee said.

Yet some observers worry that an online internship may not be as useful to young people as an in-person experience. And they share concerns about what will happen to students without any internship at all. 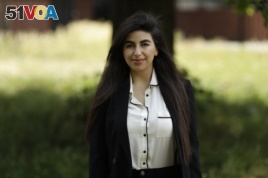 In this photo taken on Thursday, June 11, 2020, recent university graduate Sahar Shabani poses for a photograph in London. Shabani, 22, did a three-month remote internship with a development charity based in Thailand from her parents' home in South London

Edwin Koc is Director of Research, Public Policy and Legislative Affairs at the National Association of Colleges and Employers. He notes that 22 percent of the companies his group works with have cancelled summer internships.
This is troubling for several reasons, he says. It is not just that students might miss out on valuable work experience or a chance to learn new skills. Since the recession of 2008, companies have grown to depend on internships to identify the best candidates for employment. And they also give students a chance to see if the culture of a given company is a good fit for them.

"It really requires the student to kind of network and integrate with the workflow of the organization, get a feel for the organization, the type of people that individual will work with, the comfort level they find working in that kind of environment," Koc said.

David Jaeger adds that what is happening now is also closely tied to these young people's future. Jaeger is a professor of economics at the University of Saint Andrews in Scotland. He notes that job candidates are more likely to hear back from employers if they have had an internship. But also, companies increasingly expect students to have more than one internship during their college years. And students are more likely to get a second internship if they have already had one.

"So, it takes an internship to get an internship. And the kids ... who are in their second or third year of university who aren't going to have an internship, perhaps their first internship, this summer really could be behind the eight-ball going forward," Jaeger said.

However, there some people who say the future is not all bad for college students facing an unusual summer.

Rebecca Woolf is the human resources and information director of EUSA Academic Internship Experts. Every year, her group places about 2,000 students from U.S. colleges and universities in academic internships in Europe.

All of EUSA's summer programs have been cancelled. And since the programs involve the student's living and working in a foreign culture, it seems unlikely they will be able to move the programs completely online.

But that does not mean there are no valuable life experiences students can take away from this difficult time, Woolf says. And since the coronavirus crisis is affecting people around the world, these students will not necessarily be treated unfairly.

"If everybody's experiencing the same barriers right now, nobody's falling behind," she said.

Pete Musto reported this story for VOA Learning English with additional reorting from the Associated Press. George Grow was the editor.

internship – n. of or relating to schools and education

lockdown – n. a state of isolation or restricted movement established as a security measure

scar(red) – v. to cause someone to feel great emotional pain or sadness because of a bad experience

excitement – n. a feeling of eager enthusiasm and interest

network – n. to talk with people whose jobs are similar to yours especially for business opportunities or advice

integrate – v. to make a person or group part of a larger group or organization

comfort – n. a state or feeling of being at ease

behind the eight-ball – idm. in a bad position