Update Required To play the media you will need to either update your browser to a recent version or update your Flash plugin.
By Susan Shand
30 June 2020


Schools across the country are considering how and when to reopen their buildings as they plan measures to control the coronavirus.

Many school officials are worried about the costs of operating under social distancing guidelines. Such costs include protective equipment, additional teachers for smaller classes and more transportation to keep students spread out on bus rides. 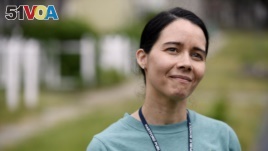 These costs are frightening for urban school systems, which are under financial pressure. They say they do not have enough money or space to make classes smaller.

In Hartford, Connecticut, Superintendent Leslie Torres-Rodriguez is very worried about how to pay for additional teachers. She said that now each classroom must have fewer students and social distancing is required.

In some grades, she said, she has individual teachers with as many as 27 students in their classrooms.

"My budget would be nonexistent," she said.

Many schools are developing plans for at least some distance learning, but many are worried about the cost.

Camden is one of New Jersey's poorest cities.Superintendent Katrina McCombs said costs for classroom cleaning and protective equipment are a concern for her. That is because the city depends on the state government for money. For the next two years, New Jersey predicts it will face a budget deficit of$10 billion.

New Jersey has not yet produced rules for the reopening of schools. McCombs said she hopes the governor gives urban areas like Camden a lot of choices. She added that many of her students live with families that have more than one generation in the same house. These are at high-risk for infection.

"...I would hope that as the governor is rolling out those recommendations, they can take those...factors into consideration," she said.

The School Superintendents Association (AASA) and the Association of School Business Officials International say making social distancing possible in schools will be costly. The Virginia-based groups estimate that it will cost the average school system about $1.8 million. However, most schools are expecting budget cuts because of the weak economy.

Alexa Garvey is a school board chairwoman in the town of Stonington, Connecticut. She said it would cut costs if the state ended a rule for the summer that there should be only one student on each seat of a bus.The seats normally fit two children. She also had some other questions.

"Does every child need a mask?" she asked. "What are our obligations to supplying those masks?"

Some schools have fewer problems.

In the wealthy town of Greenwich, Connecticut, the school system has 12.2 students for every teacher. To keep up social distancing when buildings reopen, Superintendent Toni Jones has said they will have enough open spaces in their buildings to spread out the classes.

superintendent–n. the leader or head of a school system

rolling out –v. to introduce a new system

recommendation–n. to make suggestions about something

factor–n. one of the items to be considered in a decision

district–n. an area within a town that determines which school a student attends

mask–n. clothe worn over the face to avoid disease

obligation–n the state of being in debt to something, financially or morally