Update Required To play the media you will need to either update your browser to a recent version or update your Flash plugin.
By Bryan Lynn
31 May 2020


NASA is seeking candidates to go into isolation for eight months in an experiment to help prepare for long-term stays on the moon and Mars.

Researchers say results of the study will help them better understand the physical and mental effects on humans spending extended periods in space.

The experiment is part of NASA's Human Research Program. The program seeks to discover and develop "the best methods and technologies to support safe, productive human space travel."

Until now, American astronauts have only spent long space stays on the International Space Station - ISS. Most of these missions lasted several months, with the longest reaching nearly a year. 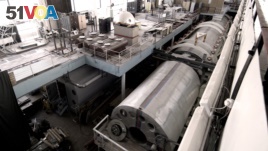 The agency has said its Artemis program aims to return humans to the moon by 2024. Next, it plans to establish a long-term base on the moon by 2028. Astronauts could live on this base for long periods to carry out experiments and possibly launch missions from there to the moon or Mars.

For the isolation study, NASA is partnering with the Institute of Biomedical Problems of Russia's Academy of Sciences. The experiment will take place at the organization's research center in Moscow.

There are some requirements for individuals interested in taking part. Candidates must be between the ages of 30 and 55 years old and speak both English and Russian. They need a college degree and/or military training or professional experience. All individuals must also pass medical and psychological examinations.

Those chosen for the study "will experience environmental aspects similar to those astronauts are expected to experience on future missions to Mars," NASA said in a statement.

Crew members in the six-person group will work closely while carrying out scientific research. Some of the experiments will involve virtual reality and performing robotic operations to prepare for future missions to the moon and Mars, NASA said.

The new experiment will build on a four-month study that ended in July 2019. That study – involving an international crew of six - took place at the same research center in Moscow.

In 2016, six scientists took part in a year-long Mars simulation in Hawaii. During that study, the scientists could only go outside their small experiment area while wearing space suits. The research centered on how well the team worked together in long-term isolation, as well as the psychological effects on humans.

The European Space Agency carried out a similar experiment in Moscow that started in 2010. The Mars simulation study – known as Mars500 - included six crew members, three Russian, two European and one Chinese.

It was the longest such experiment yet, lasting 520 days. Parts of the environment were built to simulate an actual spacecraft and Mars transportation vehicle. During the 520 days, the individuals had only personal contact with each other. They could also communicate with family and friends, but only in the same ways that would be permitted during a real space mission.

Bryan Lynn wrote this story based on reports from NASA, The Associated Press and Reuters. Caty Weaver was the editor.

isolation – n. the state of being separate from other people, places or things

aspect – n. one part of a situation, problem, subject, etc.

simulation – n. a recreation of a process or situation