Update Required To play the media you will need to either update your browser to a recent version or update your Flash plugin.
By Mario Ritter
13 February, 2018


The woman whose dealings with former South Korean President Park Geun-hye led to her removal from office has been sentenced to 20 years in prison.

The Seoul Central District Court announced the sentencing of Choi Soon-sil on Tuesday. The court ordered Choi to pay a fine of nearly $17 million.

She was found guilty on charges of abuse of power, bribery and meddling in state affairs.

The scandal involving Choi, Park, other government officials and business leaders led to huge protests across the country.

As a result, South Korea's National Assembly voted to impeach Park in late 2016. The Supreme Court voted to remove her from office last year. This led to early presidential elections, won by current president Moon Jae-in.

The scandal has led to calls for reform of the chaebols, a term for South Korea's very largest corporations. Some critics say these businesses have too much influence over the economy.

Influence over the former president

Choi Soon-sil was accused of having strong influence over the former president, which some observers described as a "cult-like" control. The 62-year-old longtime friend of Park held no government position, but she had influence over the president's decisions.

Park and Choi had known each other since the 1970s.

Choi also was found guilty of using her relationship with Park to force large businesses to donate more than $68 million to two non-profit corporations she controlled. 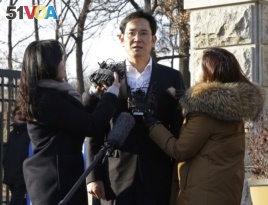 The court sentenced the chairman of the Lotte Group, Sin Dong-bin, to two and a half years in prison on bribery charges. Sin was charged with giving over $6 million to a group Choi supported in exchange for state permission to open a duty-free store and other things.

A former aide to Park also received a six-year sentence for abuse of power.

Last week, another person linked to the case had his sentence suspended and was released from prison.

Lee Jae-young is heir to the wealth of the family that controls much of Samsung Electronics, one of South Korea's biggest companies.

Lee was sentenced last August to five years in prison for bribery and a number of other financial crimes linked to the Choi scandal.

Richard Green reported this story for VOANews. Mario Ritter adapted his report for Learning English. George Grow was the editor.

scandal – n. a case of wrongdoing that shocks many people

bribery – n. the act or crime of paying money to an official in order to get something

meddle – v. to become involved in concerns of others when you involvement is unwanted

impeach – v. to bring charges against a public official

duty-free – adj. selling goods that will not be taxed when taken to another country

heir – n. a person who has the legal right to receive the property of someone after they die