Turkey Steps Up Offensive Against Kurdish Militia in Syria

Update Required To play the media you will need to either update your browser to a recent version or update your Flash plugin.
By Bryan Lynn
22 January, 2018


Turkish forces have intensified an offensive against Kurdish militia targets in northwestern Syria.

The operation is aimed at removing the People's Protection Units, or YPG, from Afrin. The United States-supported Kurdish group controls the town.

Turkey says it plans to create a 30-kilometer "secure zone" in Afrin to protect Turkish towns from attacks.

Turkish Prime Minister Binali Yildirim said a rocket attack Saturday on the Turkish border town of Kilis demonstrated the need for a secure zone. Two houses and a workplace were hit during the attack. One person was wounded. 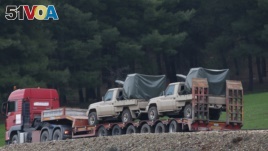 A truck, part of a convoy, carrying military pickup trucks with machine guns attached is seen on the outskirts of the village of Sugedigi, Turkey, Jan. 21, 2018.

Turkish officials have accused the YPG of being a terror group linked to the Kurdistan Workers' Party, or PKK. The PKK has been fighting an armed rebellion inside Turkey for decades.

"Our jets took off and started bombing. And now, the ground operation is under way. Now, we see how the YPG ... are fleeing in Afrin," Erdogan said. He added that he expected Turkish forces to complete the offensive "very quickly."

The militia group claimed Monday it had recaptured two villages taken by Turkish troops and their Syrian allies a day earlier.

The United States has backed the YPG in operations against Islamic State, or IS, fighters in Syria.

U.S. Secretary of State Rex Tillerson urged Turkey to "exercise restraint" and avoid killing or injuring civilians. He made the comments Saturday in phone calls with Russian and Turkish officials. He said Turkey's "legitimate security concerns" must be addressed and urged officials to remain centered on the goal of defeating IS.

In France, officials said they had requested an emergency meeting of the United Nations Security Council. "This fighting must stop," French Defense Minister Florence Parly said on French television Sunday. She warned that the Turkish offensive could interfere in the war against IS.

Turkish President Erdogan warned on Sunday that any groups taking to the streets to protest the operation would pay a "heavy price." Turkish officials said they detained 24 people on suspicion of spreading "terror propaganda" against the operation on social media.

zone – n. a specific area used for a particular purpose

jet – n. a fast airplane that has one or more jet engines

exercise – v. to use or carry out something

legitimate – adj. allowed according to rules or laws