Elizabeth Blackwell, 1821-1910: The First Western Woman in Modern Times to Become a Doctor

Update Required To play the media you will need to either update your browser to a recent version or update your Flash plugin.
By Nancy Steinbach
2010-9-8 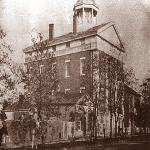 STEVE EMBER: Every week we tell about someone important in the history of the United States. Today, Shirley Griffith and Ray Freeman tell about the first western woman in modern times to become a doctor. Now, the story of Elizabeth Blackwell on the VOA Special English program PEOPLE IN AMERICA.

SHIRLEY GRIFFITH: Elizabeth Blackwell was born in Bristol, England in eighteen twenty-one. Her parents, Hannah and Samuel Blackwell, believed strongly that all human beings are equal. Elizabeth's father owned a successful sugar company. He worked hard at his job. He also worked to support reforms in England. He opposed the slave trade. He tried to help improve low pay and poor living conditions of workers. And he wanted women to have the same chance for education as men.

He carried this out in his own home. Elizabeth had three brothers and four sisters. All followed the same plan of education. They all studied history, mathematics, Latin and Greek. These subjects were normally taught only to boys. Friends asked Samuel Blackwell what he expected the girls to do with all that education. He answered: "They shall do what they please".

RAY FREEMAN: In eighteen thirty-two, Samuel Blackwell's sugar factory was destroyed by fire. He and his wife decided to move the family to the United States. Elizabeth was eleven years old.

The Blackwells settled in New York City. But Mister Blackwell's business there failed. The family moved west, to the city of Cincinnati, on the Ohio River.

Samuel Blackwell was sick for much of the trip. He died soon after arriving in Ohio. To help support the family, Elizabeth and her two older sisters started a school for girls in their home. Two younger brothers found jobs.

In the next few years, Elizabeth's brothers became successful in business. The girls continued operating their school. But Elizabeth was not happy. She did not like teaching.

Elizabeth began to visit a family friend who was suffering from cancer. The woman knew she was dying. She said women should be permitted to become doctors because they are good at helping sick people. The dying friend said that perhaps her sickness would have been better understood if she had been treated by a woman. And she suggested that Elizabeth study medicine.

SHIRLEY GRIFFITH: Elizabeth knew that no woman had ever been permitted to study in a medical school. But she began to think about the idea seriously after the woman who had suggested it died.

Elizabeth discussed it with the family doctor. He was opposed. But her family supported the idea. So Elizabeth took a teaching job in the southern state of North Carolina to earn money for medical school.

Another teacher there agreed to help her study the sciences she would need. The next year, she studied medicine privately with a doctor. He was also a medical school professor. He told Elizabeth that the best medical schools were in Philadelphia.

RAY FREEMAN: No medical school in Philadelphia would accept her. College officials told her she must go to Paris and pretend to be a man if she wanted to become a doctor. Elizabeth refused. She wrote to other medical colleges -- Harvard, Yale, and other, less well-known ones. All rejected her, except Geneva Medical College in the state of New York.

She went there immediately, but did not feel welcome. It was not until much later that she learned the reason: her acceptance was a joke. The teachers at the college decided not to admit a woman. But they did not want to insult the doctor who had written to support Elizabeth's desire to study medicine. So they let the medical students decide.

The male students thought it funny that a woman wanted to attend medical school. So, as a joke, they voted to accept her. They regretted their decision by the time Elizabeth arrived, but there was nothing they could do. She was there. She paid her money. She wanted to study.

Elizabeth Blackwell faced many problems in medical school. Some professors refused to teach her. Some students threatened her. But finally they accepted her. Elizabeth graduated with high honors from Geneva Medical School in eighteen forty-nine. She was the only woman in the western world to have completed medical school training.

Three months later, Doctor Elizabeth Blackwell went to Paris to learn to be a surgeon. She wanted to work in a hospital there to learn how to operate on patients. But no hospital wanted her. No one would recognize that she was a doctor.

A hospital for women and babies agreed to let her study there. But she had to do the tasks of a nursing student. At the hospital, Doctor Blackwell accidentally got a chemical liquid in her eye. It became infected. She became blind in that eye. So she was forced to give up her dreams of becoming a surgeon.

Instead, she went to London to study at Saint Bartholomew's Hospital. There, she met the famous nurse Florence Nightingale.

Elizabeth returned to the United States in eighteen fifty-one. She opened a medical office in New York City. But no patients came. So doctor Blackwell opened an office in a poor part of the city to help people who lived under difficult conditions. And she decided to raise a young girl who had lost her parents. RAY FREEMAN: Elizabeth Blackwell had many dreams. One was to start a hospital for women and children. Another was to build a medical school to train women doctors. She was helped in these efforts by her younger sister Emily. Emily also had become a doctor, after a long struggle to be accepted in a medical school.

With the help of many people, the Blackwell sisters raised the money to open a hospital in a re-built house. The work of the two women doctors was accepted slowly in New York. They treated only three hundred people in their hospital in its first year. Ten times as many people were treated the second year.

Elizabeth Blackwell's work with the poor led her to believe that doctors could help people more effectively by preventing sickness. She started a program in which doctors visited patients in their homes. The doctors taught patients how to clean the houses and how to prepare food so sickness could be prevented.

News of Elizabeth's theories spread. Soon, she was asked to start a hospital in London. She spoke to groups in London about disease prevention. And she worked with her friend Florence Nightingale.

Elizabeth returned to the United States to start America's first training school for nurses. And in eighteen sixty-eight, she opened her medical college for women. She taught the women students about disease prevention. It was the first time the idea of preventing disease was taught in a medical school. Soon other medical schools for women opened in Boston and Philadelphia.

RAY FREEMAN: Elizabeth Blackwell felt her work in America was done. She returned to England. She started a medical school for women in London. She wrote books, and made speeches about preventing disease.

Doctor Blackwell talked of deaths that should never have happened, of sickness that should never have been suffered. She spoke about the dangers of working too hard, of eating poor food, of houses without light, of dirt and other causes of disease. And she told doctors that their true responsibility was to prevent pain and suffering from ever happening.

In eighteen seventy-one, she started the British National Health Society. It helped people learn how to stay healthy.

Elizabeth Blackwell never married. Neither did her sisters. They believed in treating men like equals. And they expected to be treated like equals themselves. Most men of that time did not accept such treatment. This belief caused problems for their brothers too. They had trouble finding wives who wanted to be considered as equals.

Two of Elizabeth's brothers did marry, however. Both their wives were famous workers for the cause of women's rights.

She was a very strong woman. She once wrote that she understood why no woman before her had done what she did. She said it was hard to continue against every kind of opposition. Yet she kept on because she felt the goal was very important. Toward the end of her life, she received many letters of thanks from young women. One wrote that doctor Blackwell had shown the way for women to move on.

RAY FREEMAN: And I'm Ray Freeman. Join us again next week for another PEOPLE IN AMERICA program on the Voice of America.