Indian State Seeks Limits on Microfinance After Reports of Abuses

Update Required To play the media you will need to either update your browser to a recent version or update your Flash plugin.
By Mario Ritter
2010-11-11 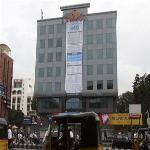 Photo: AP
A banner announces the public stock sale of SKS Microfinance at the company's headquarters in Hyderabad, India in July

Microfinance is a fast-growing part of the financial industry in many developing countries. Micro lenders give small loans to poor people to start or expand businesses.

Microcredit offers a chance to improve lives and reduce poverty. But officials in Andhra Pradesh, in southern India, are investigating if debt collections are linked to a series of suicides among borrowers.

Reddi Subrahmanyam is a rural development official in that state.

REDDI SUBRAHMANYAM: "The feeling in the community is that many of these deaths have occurred immediately after the recovery agents of the microfinance institutions have either visited the house or have done something insulting."

Reports of corruption and abuses have led to emergency measures in Andhra Pradesh to ban some collection methods. These rules also aim to limit costly fees and high interest rates on loans.

The Asian Development Bank says microfinance institutions in the Asia-Pacific area charge interest of thirty to seventy percent a year. Charges can be even higher when other costs are added.

Economist Muhammad Yunus won the Nobel Peace Prize in two thousand six for his work with microfinance. In the nineteen seventies he started what became the Grameen Bank in Bangladesh.

Grameen says it charges twenty percent for general loans, less for home and student loans. The poorest of the poor pay no interest.

But enough microfinance borrowers are paying enough for their loans to create a profitable business.

MFTransparency is an organization that works with microfinance lenders to make pricing policies more clear. The group is based in the United States. 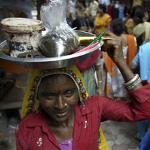 A woman sells henna at a festival in Jammu, India last year. A micro loan could help expand her business

Chief executive Chuck Waterfield says easy credit can lead some people to borrow more than they can repay. He says abuses affect only a small percentage of India's fifty million microfinance borrowers.

One of the clients of MFTransparency is the Microfinance Institutions Network. That group is fighting the new rules in Andhra Pradesh.

New York University economist Jonathan Morduch says the microcredit industry is young and there are problems. But he says too much regulation could kill it.