More Efforts Urged to Get and Keep Girls in School

Update Required To play the media you will need to either update your browser to a recent version or update your Flash plugin.
By VOA
2010-5-19 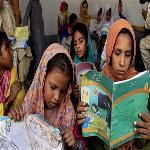 An international conference took place this week in Dakar, Senegal, to find new ways to get and keep girls in school.

The United Nations Children's Fund says nearly seventy-two million children were not in school in two thousand seven. More than half are girls, and more than two-thirds are in sub-Saharan Africa, South Asia and West Asia.

School attendance has improved in many areas. But the head of UNICEF, Anthony Lake, says:

ANTHONY LAKE: "Unless we all work harder, there may still be fifty-six million children out of school in two thousand fifteen."

He says progress and economic development depend on educating girls as well as boys. Educated girls are also at lower risk of violence, abuse and diseases like H.I.V./AIDS.

The U.N. Girls' Education Initiative organized the meeting of two hundred scholars, aid workers and government officials from twenty-two countries. The initiative was launched in Dakar ten years ago. The aim is to bring primary school education to all girls and boys worldwide by two thousand fifteen.

In Senegal, the number of public schools has doubled in the last ten years. But UNICEF's Anthony Lake said schools still lack gender equality. He said girls in one Dakar school told him about a lack of bathrooms and textbooks for them, and bullying from boys.

The conference centered on three main problems to getting and keeping girls in school: violence, poverty and poor quality education.

Ann-Therese Ndong-Jatta is education director for UNESCO in Africa. She says donors are pumping in a lot of resources and civil society groups are working on access to education.

ANN-THERESE NDONG-JATTA: "But the truth is, seventy-five percent of the children fail."

The UNESCO official says schools need to modernize and improve what they teach and how they teach it. For example, she says schools should teach African children in their native languages, not simply in English or French.

To stay in school, experts say children must consider their education useful -- and so must their parents. May Rihani from the Global Advisory Committee of the U.N. girls' initiative gave an example from a "life skills" program in Mali.

One lesson is about diarrhea. The idea is for children to go tell their mother what they learned. May Rihani says: "The mother would recognize that this education is important to her and to her family and would want the child to continue to go to school."