20 Years After the Soviet Union, Renewed Calls for Political Reform

Update Required To play the media you will need to either update your browser to a recent version or update your Flash plugin.
By Brianna Blake
2011-12-30 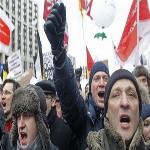 In nineteen eighty-five, Mr. Gorbachev was elected General Secretary of the Communist Party of the Soviet Union. He was fifty-four years old - the youngest member of the ruling committee, called the Politburo, that voted him into power.

For the next six years, Mr. Gorbachev worked toward a series of reforms that radically changed the Soviet Union. His reforms included loosening press restrictions and releasing political prisoners and dissidents from jail and exile within the country.

One institution Mr. Gorbachev failed to reform, however, was the Soviet Communist Party. And it was people within the party, along with the leadership of the military and the KGB, the Soviet intelligence service, that attempted a coup against Mr. Gorbachev in nineteen ninety-one.

Russia has made major economic progress since the collapse of the Soviet Union. Incomes have increased sharply. But twenty years after demonstrations against communism, Russians are again taking to the streets. This time the demonstrations are not for capitalist revolution, but for democratic reform.

Masha Lipman marched in the nineteen ninety-one protests. She is now an expert at Carnegie Moscow Center.

MASHA LIPMAN: "It's very symbolic that we are having this public activism on the rise exactly twenty years after the collapse of the USSR."

In nineteen ninety-one the major concern was economic. Vladimir Ryzhkov, at the time, was trying to run a provincial city.

VLADIMIR RYZHKOV: "The economy was destroyed. Nothing worked. I remember we had meetings every day to discuss very simple questions: Where could we get coal? Where could we get kerosene? We even had a meeting to figure out how to assure the supply of bread and milk for the city."

In the twenty years since the Soviet collapse, Russians' real incomes have increased. But democratic institutions have not kept up.

LEV GUDKOV: "Government is still vertical, it is not controlled by the society and in essence, despite all the changes, is built the same way it was built in the Soviet Union. And its base is mainly political police, criminal police, there is no independent court, prosecution and system of education."

Suspected cheating in the December fourth Russian parliamentary elections has caused the largest protests since the collapse of the Soviet Union. Activists say Mr. Putin's United Russia party illegally won a narrow majority. They want to throw out the results and hold a new vote.

And that's IN THE NEWS in VOA Special English written by Brianna Blake. I'm Mario Ritter.