Update Required To play the media you will need to either update your browser to a recent version or update your Flash plugin.
By VOA
2010-10-13

Last week, we talked about the conflict between sleepy teenagers and early morning classes. Many people commented on our website and Facebook page.

For example, Damla Ece in Turkey wrote: I agree with the idea of starting lessons later so teenagers can feel better in the morning. But sleeping more than seven hours can be wasting time for students.

Tran in Vietnam disagreed: I think teenagers, on the average, need eight to ten hours of sleep everyday. It's useless trying to force them to concentrate while they can't concentrate. 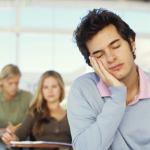 Enilton Neymakes in Brazil goes to sleep late and wakes up in the afternoon. That's my life, but at least I am studying.

Afshin Heydari from Tehran says schools should start early to avoid heavy traffic later in the morning. And Suze from Jordan wrote: When I was a teenager, I enjoyed taking my courses as early as possible. That way I could find a long time in the day to do my own activities.

But Azra from Kyrgyzstan said the reason schools start early there is a lack of classrooms.

Omid in Afghanistan calls teenagers the destiny makers of a society. So they must be more alert and active in order to be more successful.

And Joruji in Japan wrote: When I was a teenager, I used to get up before six to go to school, which was far from home, and I don't remember having problems. I think nowadays the Internet, TV games and cell phones make teens go to sleep later.

Thirty-year-old Kika in Spain says: In my opinion, young people are very lazy.

But Dennis Jin disagrees: For high school students in China, we must reach class at six-twenty in the morning and be back home usually at ten in the evening. Then we'll have some extra schoolwork to do. Can you imagine how long could we sleep every day?

Teenagers are not the only ones who suffer. Kathy in Canada wrote: My daughter likes complaining about everything in the morning, and I know that this is from lack of sleep. I wish schools should change their start time to eight-thirty or nine a.m.

Vidara Mom, a Cambodian living in New Zealand, says school starts at nine and finishes at three p.m. Therefore the students have heaps of times to interact and play before they go home.

Wibi Sebastian from Indonesia wishes school started at seven-thirty instead of seven. But one thing, don't forget to eat breakfast!

And Naima Star in Libya wrote: Getting up so early in the morning and leaving the warm bed is so difficult, especially in the cold weather. It reminds me of that old song: "It's nice to get up in the morning, but it's nicer to stay in bed."

And that's the VOA Special English Education Report. You can comment on all of our programs at 51voa.com, and on Facebook and Twitter at VOA Learning English. I'm Jim Tedder.