The US Capitol Represents American Democracy

Update Required To play the media you will need to either update your browser to a recent version or update your Flash plugin.
By Dana Demange
2012-5-8 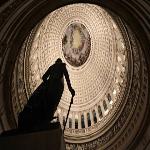 Photo: AP
A view of the rotunda of the U.S. Capitol building

FAITH LAPIDUS: And I'm Faith Lapidus with EXPLORATIONS in VOA Special English. The United States Capitol in Washington, D.C. is one of the most recognized buildings in the world. Its design was influenced by the classical buildings of ancient Greece and Rome.

The United States Congress meets in the Capitol. The building was created as a physical representation of democracy. But it is also a museum filled with art and sculpture that tell about America's social and political history.

MARIO RITTER: Our story begins on the Caribbean island of Tortola during the hot summer of seventeen ninety-two. William Thornton is hard at work on a set of building drawings. Mister Thornton came from a family of wealthy landowners who grew sugar on the island. He was trained as a doctor. But he had many interests including history, mechanics, government and building design. Mister Thornton was working to complete drawings for the design of the United States Capitol.

FAITH LAPIDUS: A few months earlier, the government of President George Washington had started a contest for the best design for the Capitol. William Thornton wanted the building to express the democratic goals of this young country. It would be a physical version of America's constitution. His design was influenced by the Pantheon in Rome, Italy and the Louvre museum in Paris, France.

William Thornton sent his building design to federal officials in Washington with a letter. "I have made my drawings with the greatest accuracy, and the most minute attention", he wrote. "In an affair of so much consequence to the dignity of the United States," it was his request that "you will not be hasty in deciding."

President Washington and Secretary of State Thomas Jefferson selected a later version of Mister Thornton's design for the Capitol. George Washington praised the design for its "grandeur, simplicity, and beauty."

MARIO RITTER: Over the centuries, the United States Capitol has had many changes and additions. Many architects have worked on its extensions. But just as important as the building's design are the priceless collections of art and sculpture inside. They tell a detailed story about different events in America's past. And, they provide an interesting commentary on how America's government, people, and artists have chosen to represent their history.

We asked Barbara Wolanin to take us through several important rooms to learn more about the building's art and statue collection. She is the curator for the Architect of the Capitol.

BARBARA WOLANIN: "The Capitol, from the very beginning, the architects envisioned art sculpture for it, paintings for it. They were really built in as part of the architecture in each of the different construction stages of the Capitol."

FAITH LAPIDUS: We start in the most beautiful room, the Rotunda. This large circular room inside the Capitol's tall white dome measures over fifty-four meters high. It was completed in eighteen twenty-four. The room connects the Senate side of the building with the House of Representatives side. So, it is both the physical and symbolic center of the building. Visiting the room is a wonderful experience. The room has a feeling of solidity and permanence, but it also is a celebration of light and airiness.

BARBARA WOLANIN: "We're in the Rotunda, right in the center of the United States Capitol and starting from the top down, the very top is the fresco painting called the "Apotheosis of Washington". It was painted by a Roman-born artist Constantino Brumidi in eighteen sixty-five, at the end of the Civil War."

MARIO RITTER: At the top of the dome is a colorful painting showing groups of people arranged in a circular shape. George Washington sits in the center of the painting, with women representing Liberty and Victory at his sides.

BARBARA WOLANIN: "He's the one in the lavender lap robe. And he's rising up into the heavens. Apotheosis means being raised to the level of an ideal or a god."

FAITH LAPIDUS: It might seem strange today to show an American president as a god. But during the nineteenth century, Americans greatly loved and respected President Washington. This included Americans from both the North and South after the Civil War. Several Roman gods are also in the painting. They are holding examples of American technologies of the time.

BARBARA WOLANIN: "They are mixed in with new American technology, the latest inventions. Like Ceres there is sitting on a McCormick reaper, which is the new way for reaping grain quickly. And Neptune with a Trident is helping lay the trans-Atlantic cable which was just being laid when he was painting this."

MARIO RITTER: The artist Constantino Brumidi finished this huge work in only eleven months. He also painted much of the frieze that extends along the Rotunda walls under the room's thirty-six windows. A frieze is a long stretch of surface that has been painted or sculpted. This one tells the history of America. The people in the frieze are painted to look three- dimensional, like sculptures.?????? ???????????? Below the frieze, eight huge historical paintings hang on the curved walls. Four paintings tell about the events of the Revolutionary War in the late eighteenth century. The four others show examples of early explorations of the country. These include the landing of explorer Christopher Columbus and the discovery of the Mississippi River.

FAITH LAPIDUS: Sculptures are another important part of the room's decoration. One marble sculpture of Abraham Lincoln was created in eighteen seventy-one, after his death. Vinnie Ream made the sculpture. She was the first woman hired by the government to create a work of art. She was only eighteen years old when she was asked to make the statue.

Another marble statue nearby honors three women who fought for voting rights for women. Adelaide Johnson made this sculpture.

BARBARA WOLANIN: "'Portrait Monument' has just an amazing history too. This is also by a woman artist. And it was commissioned by the National Woman's Party in nineteen twenty after women finally got the vote."

MARIO RITTER: The sculpted forms of Elizabeth Cady Stanton, Susan B. Anthony and Lucretia Mott seem to be coming up out of the huge piece of stone. Behind them, a fourth form rises out of the uncut stone. Adelaide Johnson said this unfinished area was meant to show that the struggle for women's equality was not over.

FAITH LAPIDUS: Many of the statues in this room and others throughout the Capitol are part of the National Statuary Hall Collection. The collection was established in eighteen sixty-four. Congress invited each state to send two statues to the collection. The statues can represent a very famous person, such as an American president. Or, they can represent someone less well known but historically important. States can also replace an older statue with a new one. It has taken a long time to complete the collection. The one hundredth statue arrived in two thousand five.

MARIO RITTER: Barbara Wolanin takes us into the National Statuary Hall. This large room was a meeting room for the House of Representatives until eighteen fifty-seven.

BARBARA WOLANIN: "This room, at the time it was built was considered the most beautiful room in the whole country. Benjamin Henry Latrobe was the architect and he really tried to make it as fine as he could. He was really interested in the classical architectures. So he wanted columns and he had these special capitals for the columns carved in Carrara, Italy based on ancient designs."

As you can guess from the room's name, it now houses many statues from the national collection. For example, there is a marble statue of Sam Houston, a leader who fought for independence for the state of Texas. One of the state of Louisiana's statues is a bronze representation of the politician Huey Long.

FAITH LAPIDUS: The newest building extension of the Capitol is the Capitol Visitor Center. These large underground rooms were completed in December of two thousand eight. The goal is to enrich the experience of the more than two million people who visit the Capitol every year.

The Visitor Center is filled with water fountains, skylights, historical exhibits, a restaurant — and more statues. A bronze statue of the Hawaiian ruler King Kamehameha is hard to miss. His clothing is almost completely covered in gold. Every year in June, Hawaiians come to the Capitol to honor this ancient ruler.

MARIO RITTER: The newest statue in the national collection is from Michigan. It shows Gerald Ford. He was a member of Congress and Vice President before becoming the nation's thirty-eighth president.

But the biggest statue in the room is not part of the Statuary Collection. It is a plaster form that was used to make the bronze statue of Freedom that stands on the dome of the Capitol high above the city. Freedom is represented as a strong woman wearing the flowing clothing of ancient Rome. She measures over five meters tall.

If you stand under a skylight in the Visitor Center, you can see the bronze statue of Freedom high up on the dome outside. She is watching over the Capitol building as it continues to represent America's history, government and people.

MARIO RITTER: And I'm Mario Ritter. You can comment on this and other programs on our Web site, 51voa.com. Join us again next week for EXPLORATIONS in VOA Special English.