Update Required To play the media you will need to either update your browser to a recent version or update your Flash plugin.
By Mario Ritter
2012-4-24 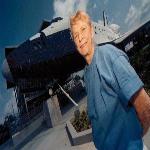 Photo: AP
Jerrie Cobb, one of the Mercury 13, at the Kennedy Space Center Visitor's Center in Florida in 1998.

BARBARA KLEIN: And I'm Barbara Klein with EXPLORATIONS in VOA Special English. Today we tell about a program in the nineteen sixties to train women as astronauts. Today they are known as the Mercury Thirteen. They never reached their goal of spaceflight. But they led the way for other American women to travel into space.

As a result, President Dwight Eisenhower formed the National Aeronautics and Space Administration in nineteen fifty-eight.

BARBARA KLEIN: In the fall of that year, William Randolph Lovelace was attending a meeting of the Air Force Association in Miami, Florida. Doctor Lovelace was deeply involved in the effort to put Americans into space. He served on NASA's Special Committee on Life Sciences. Astronaut candidates had been put through tests at his medical center in Albuquerque, New Mexico.

Doctor Lovelace and Air Force Brigadier General Donald Flickinger wondered if women could be trained as astronauts. General Flickinger had designed the space flight tests for the astronaut candidates. He also knew that the Russians had plans to launch a woman into space.

The two men met with Jerrie Cobb, a twenty-eight year-old pilot. They thought Miz Cobb would make a good female astronaut candidate. They invited her to Doctor Lovelace's medical research center in Albuquerque for tests.

The tests included a general physical examination and X-rays. Some tests involved electric shock. Other tests pushed the body to its physical limits. Yet another test required freezing the inner ear with ice water to test for the condition of vertigo. The doctors also measured brain waves. They performed a total of seventy-five tests on Jerrie Cobb.

BARBARA KLEIN: Jerrie Cobb had one unusual test on a machine called the Multi-Axis Space Test Inertia Facility, or MASTIF. The MASTIF was in NASA's Lewis Research Center in Cleveland, Ohio. This special machine could move a person in three different directions almost at the same time. It was designed to test a pilot's ability to control a spacecraft under severe conditions. Jerrie Cobb passed the test.

STEVE EMBER: During her tests, Jerrie Cobb knew that if she failed the first level of astronaut training no other women would be tested. By August, the results of the tests were complete. Doctor Lovelace was fully satisfied that Jerrie Cobb had scored similarly to the Mercury Seven astronauts. He even noted that Miz Cobb required less oxygen than the average male astronaut. Jerrie Cobb's success meant that more female candidates were needed for more tests.

Miz Cobb worked hard to develop a list of good candidates by August, nineteen sixty-one. Twenty-five other women pilots were chosen and tested at Doctor Lovelace's research center. Candidates had to have flown an airplane for more than one thousand hours. Generally, they were required to be in their early thirties. And they had to be in good physical health.

STEVE EMBER: Not all the women invited to Albuquerque passed Doctor Lovelace's tests. After the first level of testing only thirteen remained, including Jerrie Cobb. The youngest among them was twenty-one-year-old Wally Funk who was also a competitive skier. Forty-year-old Jane Hart was the oldest. She was married to Senator Philip Hart of Michigan. She also flew helicopters.

These women would be known as the Mercury Thirteen. They had passed the first level of tests that the Mercury Seven astronauts faced. They now wanted to progress to the next level.

BARBARA KLEIN: Not all the Mercury Thirteen women took the next level of testing. For the Mercury Seven male astronauts, psychological and space flight testing took place at Wright-Patterson Air Force Base in Dayton, Ohio. However, NASA would not permit testing to be done on the women at that base.

STEVE EMBER: Doctor Lovelace had made plans to test the other women in the group at Pensacola. After a delay, September eighteenth was chosen as the day for flight-testing to begin. But it never took place. The women received telegram messages saying the tests had been cancelled four days before they were to begin.

The Navy wanted NASA to approve the training. NASA resisted the idea. Jerrie Cobb and Jane Hart immediately tried to get the testing restarted. Their efforts led to a committee hearing in Congress. But the women found little support.

Astronaut John Glenn spoke to the committee. He said: "The fact that women are not in this field is a fact of our social order." Glenn later said that he would not oppose a female astronaut program. But he saw no requirement for one.

BARBARA KLEIN: After two days of hearings, members of Congress had heard enough. They would do nothing to change NASA's decision not to train women for spaceflight.

But the answer about women in space came less than one year after those congressional hearings. On June sixteenth, nineteen sixty-three, Russian cosmonaut Valentina Tereshkova became the first woman in space. She orbited the Earth forty-eight times and spent almost three days in space.

STEVE EMBER: The Mercury Thirteen women were never officially part of the NASA space program. But their willingness to undergo testing to be astronauts and their performance in those tests showed that women could go into space.

It was not until nineteen eighty-three that Sally Ride became the first American woman in space. Sixteen years later, Eileen Collins became the first woman to command a Space Shuttle mission. She invited the surviving members of the Mercury Thirteen to attend the launch. Seven women were able to attend.

On May twelfth, two thousand seven, the University of Wisconsin-Oshkosh also honored these women. The university gave honorary Doctor of Science degrees to the eight surviving members of the Mercury thirteen. The university said it was honoring the spirit and efforts of this special group of women.

STEVE EMBER: And I'm Steve Ember. You can read and listen to this program on our Web site, 51voa.com. Join us again next week for Explorations in VOA Special English.