Websites Show Young People How to Save

Update Required To play the media you will need to either update your browser to a recent version or update your Flash plugin.
By VOA
2011-9-7 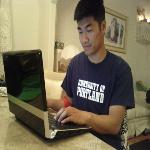 Young people are perhaps better-known for spending money than saving it. But some new banking websites are seeking to change that. These websites offer young people the information and tools they need to watch over their money. The websites also let the users share their financial experiences with other young people.

Nineteen-year-old Alix Scott has been working at a store this summer. She is saving money to pay for college next year.

ALIX SCOTT: "I have to save for all my college money because my parents, they can't afford to co-sign on loans. So, I have to rely on my own savings."

But instead of putting her money in a local bank, Miz Scott began using SmartyPig, a web-based banking service.

ALIX SCOTT: "When I do that, I overcome the impulses to just spend the money."

MICHAEL FERRARI: "SmartyPig is really all about helping people save for very specific financial goals. So that could be a wedding, a vacation, an I-phone."

Mister Ferrari says SmartyPig opened after he started a college savings account for his new baby. He says that experience helped him realize the power of saving for a specific goal. Helping other savers pay attention to their goals is the idea behind his on-line company.

MICHAEL FERRARI: "For example, I'm saving up for a vacation. I want to save five thousand dollars. I want to meet this goal in three years. SmartyPig will actually calculate how much money you need to allocate every month. You don't have to move from your existing bank, we'll actually go in and withdraw those funds on the day you specify every month and we'll put them into your SmartyPig account, where they'll actually accrue interest, as well."

Mister Ferrari says his website also enables outsiders to add money to the accounts of its users.

MICHAEL FERRARI: "Perhaps maybe a holiday is coming up or your birthday is coming up, and rather than getting a gift, your friends, your family can actually contribute to any of your SmartyPig goals."

Twenty-two-year-old Khang Nguyen is studying civil engineering in college. He likes being able to share his saving goals with his online community.

KHANG NGUYEN: "I think it's actually a good thing that they are able to see it. Like, a bunch of my friends after they found out, you know, about what I do, they always come ask me for financial advice."

A growing number of young people have shown an interest in online banking sites like SmartyPig. They say they like the ease of operation and services the sites offer. These personal finance websites offer tools that help users follow their spending, set up a budget, and combine their investments. And they all involve social media, which interests young adults who are already at ease about sharing their personal information online.

JANET STAUBLE: "There's all kinds of individuals who have their own blogs who are talking about money, creating videos, making info-graphics. You just kind of see personal finance information in places that you wouldn't expect."

Miz Stauble says people share things on the Internet that they might not say to their friends.

JANET STAUBLE: "It's not likely that, you know, you might go to a friend and say, ‘Hey, I paid off one thousand dollars on my credit card today,' but people write up blog posts about it and they explain how they did it, and how much closer they are to their financial goal, whatever it is."