Update Required To play the media you will need to either update your browser to a recent version or update your Flash plugin.
By George Grow
19 October, 2016


The United Nations says the war in Afghanistan killed more than 2,500 Afghan civilians in the first nine months of 2016.

The U.N. Assistance Mission in Afghanistan (UNAMA) released the findings on Wednesday. The Mission repeated its call for all sides in the Afghan war to prevent harm to civilians.

The number of civilian casualties represents a one percent decrease from the same period in 2015. However, deaths and injuries among Afghan children increased.

A mission statement said U.N. officials have been deeply concerned about the rising number of child casualties since 2013. It said that the mission documented 639 deaths of Afghan children in the first nine months of 2016. 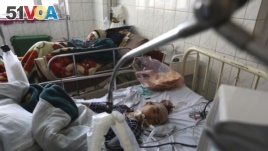 The Taliban ruled most of Afghanistan from 1996 until late 2001, when it was ousted from power. The United States and its allies raided the country after the September 11, 2001 al-Qaida terror attacks. They accused the Taliban of providing shelter to al-Qaida leader Osama bin Laden.

Fighting against rebel forces causing most of the civilian casualties

The U.N. report noted that fighting between Afghan forces and rebels was the leading cause of civilian casualties this year.

Other major causes include suicide and complex rebel attacks, as well as improvised explosive devices (IEDs).

The report noted a 72 percent increase in civilian casualties from air raids by pro-government forces this year. It said that international military forces were responsible for one third of those raids.

There were more than 11,000 conflict-related civilian casualties in 2015. The Afghan war has since intensified, with Taliban forces expanding their activities to many more provinces this year.

In all, U.N. officials estimate that the Afghan war has caused 70,000 civilian casualties. That is said to include over 25,000 deaths since the counting began seven years ago.

Displacement of civilians and returning civilians

UN officials are also worried about the rising number of Afghan civilians displaced by the conflict. They have warned that more than one million Afghans will be on the move by the end of this year. They say that number includes tens of thousands of Afghan refugees returning mostly from nearby Pakistan.

The U.N. estimates that 400,000 Afghans have returned to the country since the start of the year.

Reporter Ayaz Gul in Islamabad wrote this story for VOANews. George Grow adapted his story for Learning English. Caty Weaver was the editor.

casualty – n. someone who is injured or killed in a war or an accident

improvised – adj. of or related to doing something without preparation or by using whatever is available