Update Required To play the media you will need to either update your browser to a recent version or update your Flash plugin.
By Alice Bryant
07 July, 2019

A 1,400-year-old Peruvian method of diverting water could supply up to 40,000 Olympic-size swimming pools' worth of water to Lima each year. That information comes from a new study published in Nature Sustainability.

It's one example of how ancient methods could support existing modern ones in countries without enough water.

More than a billion people across the world face water shortages. Man-made reservoirs store rainwater and water overflow for use during drier times. But reservoirs are costly, require years to plan and can still fail to meet water needs. Recently, for example, the reservoirs in Chennai, India, went almost dry. The city's four million people had to then depend on water transports from the government.

Peru's capital, Lima, depends on water from rivers high in the Andes Mountains. It takes only a few days for water to flow down to the city. So when the dry season begins in the mountains, the water supply quickly disappears. The city suffers shortages of 43 million cubic meters during the dry season. It resolves this with modern structures such as man-made reservoirs. 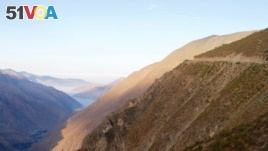 View of the Andean highlands where Huamantanga is located. The city of Lima is located downstream in the horizon background.

These reservoirs are not the only solution, however. Over a thousand years ago, indigenous people developed another way to solve water problems.

Boris Ochoa-Tocachi is a researcher at Imperial College London and lead writer of the study. He explored one of the last remaining water-harvesting systems in the small mountain community of Huamantanga, Peru. The system was developed even before the ancient Inca civilization.

The 1,400-year-old system is designed to increase the water supply during the dry season by diverting and slowing water as it travels down the mountains.

This nature-based method is made of special canals that guide water from its source to a series of water bodies and hillsides. The water goes slowly into the ground, then flows downhill through the soil and reappears in water bodies near the community.

Its aim was to increase the water's travel time from days to months in order to provide water throughout the dry season.

But Ochoa-Tocachi said the amount of water that could be harvested was an unknown before the study.

The researchers measured how much the system slowed the flow of water by injecting special dye in the highlands and noting when it reappeared in water bodies. The dyed water started to surface two weeks later and continued flowing for eight months — a huge improvement over the hours or days it would normally take.

"I think probably the most exciting result is that we actually confirmed that this system works," Ochoa-Tocachi said. "It's not only trusting that, yeah, we know there are traditional practices, we know that indigenous knowledge is very useful." He said there is now proof the systems are valuable today and can be a tool to help solve modern problems.

The researchers next considered how using a larger version of the system could help Lima. They combined what they learned in Huamantanga with the knowledge of physical qualities of Lima's surroundings. The resulting estimates say the system could increase Lima's dry-season water supply by 7.5 percent overall and up to 33 percent at the start of the dry season. This amounts to nearly 100 million cubic meters of water each year — equal to 40,000 Olympic-size swimming pools.

Todd Gartner is director of the Natural Infrastructure Initiative at the World Resources Institute. He noted that this study "takes what we often just talk about...and it puts this into practice." He said it does a lot of evaluation and observation and "puts real numbers behind it."

The system is also economically sound. Ochoa-Tocachi estimated that building canals similar to those in Huamantanga would cost 10 times less than building a reservoir of the same size. He also said former highland societies in other parts of the world had methods for diverting and slowing water flow. And, they could use these methods today to support their costlier modern methods.

"I think there is a lot of potential in revaluing these water-harvesting practices that have a very long history," Ochoa-Tocachi said. He added that the idea of "using indigenous knowledge for solving modern engineering problems...is probably very valuable today."

divert – v. to change the direction or use of something

reservoir – n. a usually man-made lake used to store water for use in people's homes, businesses and other places

indigenous – adj. describing ethnic groups who are the original settlers to a specific region

canal – n. a long narrow place that is filled with water and was created by people

dye – n. a substance used for changing the color of something

actually – adv. used to refer to something that is true or real

evaluation – n. o judge the value or condition of (someone or something) in a careful and thoughtful way

potential – n. a quality that something has that can be developed to make it better