Update Required To play the media you will need to either update your browser to a recent version or update your Flash plugin.
By Marilyn Rice Christiano
18 September, 2012

STEVE EMBER: And I'm Steve Ember with EXPLORATIONS in VOA Special English. Today we continue the history of the American space program with the flight of Apollo Thirteen, the flight that almost did not return home.

BARBARA KLEIN: American astronauts in Apollo Eleven landed on the moon July twentieth, nineteen sixty-nine. A second landing was made four months later. Both flights were almost perfect. Everything worked as planned. Everyone expected the third moon-landing flight, Apollo Thirteen, would go as well as the first two. But it did not. 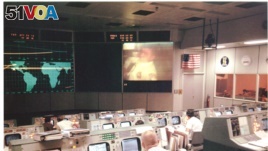 STEVE EMBER: The Apollo Thirteen spacecraft was like the earlier Apollos. It had three major parts. One was the command module. The astronauts would ride to the moon in the command module and then ride back to Earth in it. It was the only part of the spacecraft that could survive the fiery return through the Earth's atmosphere.

The lunar module was the second part. It would carry two of the astronauts to the moon's surface. It would later launch them from the moon to rejoin the command module.

The third part of the Apollo spacecraft was the service module. It had a rocket engine that the astronauts fired to begin circling the moon. They fired it again to break out of moon orbit for the return flight to Earth. The service module carried tanks of oxygen for the flight, and the fuel cells that produced electricity and water the astronauts needed to survive.

BARBARA KLEIN: There was what seemed to be a minor problem during the ground tests before launch. Two large tanks in the service module held liquid oxygen. The oxygen was the fuel that provided water and electricity for the command module. One of the oxygen tanks failed to empty normally during the ground test. Engineers had to boil off the remaining oxygen by turning on a heater in the tank. Commander Lovell said later he should have demanded the oxygen tank be replaced. But it seemed to be fixed. So no change was made.

STEVE EMBER: After launch, Apollo Thirteen sailed smoothly through space for two days. Controllers on the ground joked that the flight had gone so well they did not have enough to do. That changed a few hours later. The first sign of trouble was a tiny burst of light in the western sky over the United States. It looked like a far-away star had exploded.

BARBARA KLEIN: Near the space center in Houston, Texas, some amateur star-watchers were trying to see the Apollo spacecraft through telescopes. One of the group had fixed a telescope to a television set so that objects seen by the telescope appeared on the television screen. The spacecraft was too far away to be seen. But suddenly, a bright spot appeared on the television screen. Over the next ten minutes it grew into a white circle. The observers on the ground had no reason to believe the white spot they saw was made by the spacecraft. They thought it was a problem with the television. So they went home to bed.

STEVE EMBER: It was not a problem with their television. It was a serious problem with Apollo Thirteen. It happened a few minutes after the three astronauts completed a television broadcast to Earth.

The number two oxygen tank in the service module had exploded. The liquid oxygen escaped into space. It formed a huge gas ball that expanded rapidly. Sunlight made it glow. Within ten minutes, it was almost eighty kilometers across. Then it slowly disappeared. The cloud was the white spot the observers in Houston had seen on their television.

BARBARA KLEIN: The loss of one oxygen tank should not have been a major problem. Apollo had two oxygen tanks. So, if one failed, the other could be used. But the astronauts soon learned that the explosion had caused the other oxygen tank to leak.

The astronauts were three hundred twenty thousand kilometers from Earth with little oxygen, electricity and water. Their situation was extremely serious. No one knew if they could get the spacecraft back to Earth, or if they could survive long enough to return.

STEVE EMBER: The astronauts and the flight control center quickly decided that the lunar module could be their lifeboat. It carried oxygen, water, electricity and food for two men for two days on the moon's surface.

But there were three astronauts. And the trip back to Earth would take four days. The men greatly reduced their use of water, food and heat. And they turned off all the electrical devices they could.

Back on Earth, space scientists and engineers worked around the clock to design and test new ideas to help the astronauts survive.

Engineers on the ground designed a way the astronauts could connect air-cleaning devices from the command module to the air system in the lunar module. The astronauts made the connector from a plastic bag, cardboard and tape. It worked. Carbon dioxide was no longer a problem.

This view of the damaged Apollo 13 Service Module was taken from the Command Module as the Apollo crew returned to earth.
STEVE EMBER: Now the problem was how to get the astronauts back to Earth as quickly and safely as possible. They were more than two-thirds of the way to the moon on a flight path that would take them to a moon landing. They needed to change their flight path to take them around the moon and back toward Earth. They had to do this by firing the lunar module rocket engine for just the right amount of time. And they had to make this move without the equipment in the command module that kept the spacecraft on its flight path.

BARBARA KLEIN: The lunar module was extremely uncomfortable. The astronauts had very little to drink and eat. But the cold was the worst part of the return trip. The temperature inside the lunar module was only a few degrees above freezing. It was too cold for them to sleep much.

STEVE EMBER: The crew moved back to the command module a few hours before landing. They turned on the necessary equipment and broke away from the damaged service module. As the service module moved away, they saw for the first time the damage done by the exploding oxygen tank. Equipment was hanging from a huge hole in the side of the module.

One hour before landing, Lovell, Swigert and Haise said thanks and goodbye to their lifeboat, the lunar module. They separated from it and sent it flying away from them.

BARBARA KLEIN: Now, the command module of Apollo Thirteen headed alone toward Earth. It fell through the atmosphere. Its parachutes opened, slowing its fall toward the Pacific Ocean, near Samoa. Ships and planes were waiting in the landing area.

And millions of people around the world were watching the live television broadcast of the landing. People everywhere cheered as the cameras found the spacecraft floating downward beneath its three parachutes. They watched as it dropped softly into the water.

BARBARA KLEIN: And I'm Barbara Klein. Join us again next week for another EXPLORATIONS in VOA Special English. We will finish the story of the Apollo moon landing program. You can find earlier programs about American space flights at our web site, 51voa.com.
Related Articles
go top