Update Required To play the media you will need to either update your browser to a recent version or update your Flash plugin.
By Kim Varzi
10 July, 2012

Welcome to EXPLORATIONS in VOA Special English. I'm June Simms. Protest songs are part of the fuel of revolutions. Today, we talk to three rappers who played an active part in the Arab Spring revolutions and America's Occupy protests.

A new generation of musicians helped give voice to the popular uprisings in twenty-eleven that came to be called the Arab Spring.

In Tunisia, the rapper known as El General, Hamada Ben Amor, uploaded a song to YouTube in November of twenty-ten. He called it "Rayes Lebled," meaning "president of the country" or "head of state." It criticized the government of Zine El Abidine Ben Ali with lines like "Mister President, your people are dying" and "I see injustice everywhere."

The song quickly became popular among Tunisians as they began to protest against high unemployment, rising food prices and corruption. El General's music helped express the demands of protesters following the death of Mohamed Bouazizi. 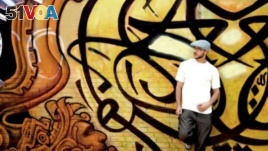 Khaled M is a Libyan-American rapper
He was a twenty-six-year-old Tunisian who sold fruits and vegetables on the street in Sidi Bouzid. In December of twenty-ten he set himself on fire to protest police abuse. Tunisians rebelled, and the following month, their longtime president fled the country.

When the protests had spread, El General posted another song on YouTube, called "Tunisia Our Country" ("Tounis Bledna"). As a result, security forces detained him. But they freed him soon after Tunisians demanded his release.

Hamada Ben Amor has been singing about social and political issues and inequality since two thousand eight. VOA's Faiza El-Masry asked El General if he had expected "Rayes Lebled" to become so popular.

EL GENERAL (TRANSLATED): "No I didn't. I just wrote from my heart and just wanted to defend the Tunisian people and express how they feel. And with God's help we got rid of the president and the government and every single Tunisian citizen shared the same feeling I expressed in the song. We were living in horror, not only us, all other people, like Egyptians, Libyans. We were all afraid of the governments. We wouldn't dream that we would get rid of them."

Now, he worries about the future. He says he hopes the suffering and sacrifices of young people will not be worthless. He hopes that the people in Arab nations will be happy with the governments that come to power. But one thing El General says he does not wish for is to enter politics.

EL GENERAL (TRANSLATED): "I'm an artist. I would never be a politician. In politics you have to be maneuvering and I like to be straightforward. That's why I prefer to be a singer, an artist."

The demonstrations in Tunisia helped create a new movement of Arab protests across North Africa and the Middle East. Egypt's longtime leader Hosni Mubarak and Libya's Moammar Gadhafi were also driven from power in twenty-eleven.

El General is currently working with other musicians to denounce the violence in Syria.

Protests began there in March of twenty-eleven and grew into armed conflict as the government tried to crush the popular uprising.

In the early months of the Syrian protests, there were reports about a young man named Ibrahim Qashoush. At protests, he would sing a popular song among opponents of Syrian President Bashar al-Assad. The song included lines like "It's time to leave, Bashar" and "Freedom is near."

Mr. Qashoush was found dead in the Orontes River in his hometown of Hama. His throat was cut and reports said his vocal cords were removed -- a message to anyone who might want to rebel or sing anti-government songs.

In Libya, activists used social media to report on the violence and protests that took place in the east. Khaled M is a rapper who was born in the United States to Libyan parents. He says the activists received training from a group of dissident Libyans living in the American state of Kentucky. He says they trained people in eastern Libya how to reach Western media through sites like YouTube and Google Voice.

Khaled M used some of those reports to later produce a video for his song "Can't Take Our Freedom." The song includes the British-based musician Lowkey, who was born to an Iraqi mother and British father.

"Can't Take Our Freedom" was released around two weeks after the protests in Libya began in February twenty-eleven. The song became popular among people in Libya.

In the darkest hours, when the world has turned away

And no one's watching, when the sky has turned to gray and

You have no options, when your voice is illegal

Only choice for the people

Is to stand up proudly in the face of death

It ain't a waste of breath when you speak up loudly

Living on their own 'cause their papa's missing

Don't know if his dead or he's locked in prison

Disappeared, they consider him the opposition

And now have a vision of dreams I shouldn't see

And could it be this close? Nah it couldn't be

But if the people in Egypt and Tunis can do this

Decide their fate, then why wouldn't we

More than forty years we done rocked the nation

Under occupation we cannot be waiting

We can stop debating, when one of us dies

Ten jump in line ready to box the satan

You can't take our freedom or take our soul

Take our freedom or take our soul

You are not the one that's in control

You are not the one that's in control

Go ahead and divide your plans, at the end of the day

You are just a man

So he wrote "Can't Take Our Freedom." The song mentions his father, who had escaped from jail as a Libyan dissident years earlier. It also mentions his uncles who were tortured or killed. He says the song is meant to urge people in oppressed societies to use their voice.

KHALED M: "Basically, it was just an encouraging song to let people in Libya know, and also other countries facing oppression, know that to use your voice and to just stand up and speak out is not a waste and it's not done in vain. You know, people were dying and being slaughtered for just holding up signs. And we just wanted to let them know that we were with them and the struggles weren't for nothing, and not everybody realizes that. And also, this was at a time when media, foreign media, hadn't yet infiltrated Libya, and the world wasn't yet in the know about what was going on. This was before NATO's involvement."

In Egypt, protests began in Tahrir Square in Cairo in January of twenty-eleven. Less than a month later, President Hosni Mubarak resigned. The calls of the huge crowds of peaceful protesters were answered.

The occupation of Tahrir Square gained the attention of the world. It also influenced the "Occupy Wall Street" protests that started in September of twenty-eleven in New York City. The Occupy movement spread across the country, and to other countries.

Demonstrators occupied parks and other public spaces. They called themselves "the 99 percent."

PROTESTER: "The fact is that we use social media, we use Twitter, we use Facebook, we e-mail, we text one another, and we can muster a couple of thousand people within an hour to gather at any spot that we ask them to gather at."

They said it was unfair for the richest one percent of the population to control much of the nation's wealth. Most of the occupiers said they were not against capitalism, but against the growing divide between the rich and the poor. 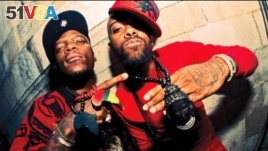 M-1, left, and stic.man are the hip-hop group Dead Prez
M-1 is a rapper and activist in the United States. He and Stic.man perform as the hip-hop duo Dead Prez. M-1 joined the Occupy protests in several cities. He says that like the Arab Spring protests, many of the protesters were young and new to public resistance.

M-1: "Most of the people are new resisters. We aren't talking about old experienced, would-be revolutionaries, freedom fighters or people who go against the grain. No, most of them are new and are with a new kind of understanding of how we are going to express our angst against these problems."

M-1 says people in the Occupy movement were trying to call attention to high unemployment and other problems in society.

M-1: "Mainly the criticism is that there is obviously something wrong. You know, I think that's the thing. I think what we're looking at is this huge web of contradictions. And I think that is what the Occupy movement is on the top of, which I think makes the people brave and courageous."

M-1 produced a song with the Italian musician Bonnot called "99 Percent." It also features American rapper Talib Kweli. In both Italian and English the song expresses anger against big companies and financial institutions.

So what does M-1 think the answer is?

M-1: "I think the answer could and should be sharing the resources amongst the people who work who produce it, who make it happen around the world. But that would mean them sharing the power and empowering and disempowering the huge conglomerate imperialist structure of corporations that holds sway around the world. But that would make a few small people angry, but they are strong enough to have an army behind them. And we would have to figure how to wrestle the power out of the hands of those greedy few."

Kim Varzi wrote this week's program. You can read and listen to our shows, add comments and get podcasts at 51voa.com. I'm June Simms. You can also follow us on Facebook and Twitter at VOA Learning English. Join us again next week for EXPLORATIONS in VOA Special English.
Related Articles
go top