From a Photo of War, a Statue to Remember

Update Required To play the media you will need to either update your browser to a recent version or update your Flash plugin.
By Paul Thompson
03 July, 2012

July fourth, Independence Day in the United States, is a time of celebration. Friends and family across the country gather for food, music and activities. Fireworks light the night sky. Memories are made.

Photographs preserve our family memories. Sometimes they capture the memories of a nation. This week, Steve Ember and Barbara Klein tell the story of a famous photograph from World War Two. It led the sculptor Felix de Weldon to create one of the largest free-standing bronze statues in the world.

STEVE EMBER: Our story is about one moment in time. Really, one-four-hundredths of a second. That is the amount of time it took Associated Press photographer Joe Rosenthal to capture a historic image on film.

The photograph shows six men and an American flag during a battle in World War Two. Joe Rosenthal took it on February twenty-third, nineteen forty-five, on the Pacific island of Iwo Jima. Japanese forces held the island. American Marines were trying to capture it. 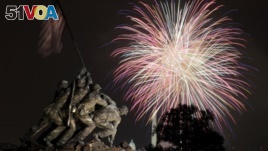 The United States Marine Corps War Memorial, better known as the Iwo Jima Memorial, in Arlington, Virginia, on July 4, 2011, as fireworks burst over Washington. The Washington Monument and the Capitol are in the distance.
On the fourth day of battle, Marines fought to the top of Mount Suribachi, the tallest mountain on Iwo Jima. A small American flag was sent to the top. The Marines placed the flagpole in the ground.

BARBARA KLEIN: But the small flag could not be seen clearly far below. Commanding officers ordered the Marines to replace it with a much larger one. Joe Rosenthal wanted to make a picture of the event. So he took his camera and began to climb slowly up the mountain.

When he reached the top, Marines were tying the larger flag to a heavy pole. Joe Rosenthal backed away from the group and began talking to another photographer.

A minute later, he saw movement out of the corner of his eye. "There it goes!" he said. He swung his camera up, following the movement of the flag, and pressed the button that took the picture.

STEVE EMBER: Six men are in the photograph. But only four of them are clearly seen.

In the front is Harlon Block, a Marine from Yorktown, Texas. Next is John Bradley. His face is the only one in the picture. He was a Navy corpsman; his job was to treat the wounded.

Also in the picture is Franklin Sousley, a Marine from Hilltop, Kentucky. And all the way at the left is Ira Hayes, a Marine, and an American Indian. The heavy pole holding the flag had just left his hand when the picture was taken.

Behind these four men are two other Marines. They cannot be seen as clearly. They are Rene Gagnon of Manchester, New Hampshire, and Mike Strank. He lived in Johnstown, Pennsylvania, but was born in Jarabenia, in what was then Czechoslovakia.

BARBARA KLEIN: The next day, Joe Rosenthal's film went by airplane to the island of Guam where it was developed and printed.

The pictures were given to Associated Press photo editor John Bodkin. It was his job to decide which ones to send to the United States. They would go on a machine that sent images by radio.

As histories tell it, he looked and looked at the first photograph, and said: "This is one for all time." Within minutes he sent the picture of the six men raising the flag to the Associated Press headquarters in New York.

From there, the photograph went to newspapers across the United States. Most decided to print a huge copy on their front page.

STEVE EMBER: Most photo experts will tell you that the picture Joe Rosenthal made is almost perfect. The camera catches the flag as it rises. The flagpole cuts across the photograph. Wind blows against the flag.

The experts also say you must look at the picture as the American public saw it in nineteen forty-five. The world had been at war for years. Victory was not yet certain. Many people worried about family members. Many had a deep fear of the enemy.

The picture shows strength and courage. It suggests that six young men are working together to defeat the enemy. Joe Rosenthal's photograph seemed to say: the battle may not be over, but we are winning.

It was the very image of a future American victory.

BARBARA KLEIN: In Washington, DC, Felix de Weldon saw the photograph in the newspapers. Born in Austria, he came to the United States and was an artist in the Navy.

Many years later he would say, "I had been an artist all my life. When I first saw it I recognized the power of this photograph. I could not take my eyes from it. I looked at the photograph for some hours and then began working."

Seventy-two hours later, Felix de Weldon had made a small statue of Joe Rosenthal's picture. Within days, members of Congress had seen the small statue. Many began to call for a huge statue. President Franklin Roosevelt ordered the Marine Corps to send home the men who had raised the flag.

STEVE EMBER: By then, however, it was too late. Mike Strank, Harlon Block and Franklin Sousley were dead. They were among the more than six-thousand Marines killed on Iwo Jima.

Navy Corpsman John Bradley had been severely wounded. But he, Rene Gagnon and Ira Hayes returned to the United States.

People said they were heroes. The three men said they had done nothing but help put up a flag. But Joe Rosenthal's photograph was so powerful, nothing would change people's minds.

Felix de Weldon soon made a life-size copy of the statue. He carefully copied the faces of the three survivors. He used all the photographs he could find for the three who had been killed.

His statue helped pay for America's war effort. The statue and the three survivors traveled from city to city to raise money.

There was public demand to put the image on a postal stamp. In July of nineteen forty-five, the government agreed. More than one-hundred-thirty-seven-million were printed.

People also demanded a huge statue of the six Marines.

In nineteen forty-six, Felix de Weldon started all over again. First he made a statue out of plaster. Then he used the plaster form as a guide to make the final statue out of bronze metal.

Again, he called on the three survivors. Felix de Weldon wanted to make sure he had them identified correctly.

STEVE EMBER: It took Felix de Weldon nine years to complete the statue. The memorial honors all members of the United States Marine Corps who died in battle since the American Revolution.

BARBARA KLEIN: Millions of people have come to see the statue that Felix de Weldon made. It stands in a grassy area along a busy road at the edge of Arlington National Cemetery, in Virginia. The statue weighs more than twenty-tons.

Each man is almost ten meters tall. They seem about to move. Their bodies push forward as they struggle to raise the flag. Their clothes show the bones and muscles underneath. Their faces show the hard work.

Many visitors say it is an emotional experience. People stand and look up at the six men. And, they take pictures, just as Joe Rosenthal did on February twenty-third, nineteen forty-five.

Soon after the photograph from Mount Suribachi was published, some people began to dispute it. They suggested that Joe Rosenthal had placed everyone where he wanted them, and then took the photo. Joe Rosenthal always said that was not true.

You can decide for yourself. A copy of Joe Rosenthal's photograph, and a picture of Felix de Weldon's statue, can be found at 51voa.com.

BARBARA KLEIN: This program was written by Paul Thompson. Steve Ember and Barbara Klein were our announcers. I'm Mario Ritter.

For MP3s, transcripts and now PDFs of our programs go to 51voa.com. For English learning activities and interactive features, click on The Classroom at VOA Learning English. And follow us on Facebook, Twitter, YouTube and iTunes. Join us again next week for more EXPLORATIONS.
Related Articles
go top