Update Required To play the media you will need to either update your browser to a recent version or update your Flash plugin.
By Jerilyn Watson
29 May, 2012

MARIO RITTER: And I'm Mario Ritter with EXPLORATIONS in VOA Special English. In the early eighteen hundreds, traveling in the United States was dangerous. Business and trading were limited. Then came the waterway called the Erie Canal. It helped build America.
(MUSIC)

BOB DOUGHTY: Two adventurers recently traveled the more than five hundred eighty kilometers of America's Erie Canal in kayaks. Then the two, Richard Harpham of Britain and Glenn Charles of the United States, paddled into the Hudson River to complete their trip to the Statue of Liberty in New York City. 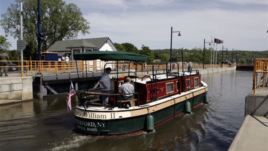 A tour boat passes Lock 2 on the Erie Canal in Waterford, New York, in 2008.
They piloted their light, small boats more than eight hundred kilometers in about twenty-one days. That time also included stops for cultural and historic activities along the way.

The event was called the "The New York State Spare Seat Expedition." Harpham and Charles invited others to join them for parts of their travels. The "guests" rode in the additional seat in the boats. Many kayaks have a single seat.

MARIO RITTER: The two men call themselves "expeditionary kayakers" – explorers on the water. One goal of their trip was to honor the struggles that built the Erie Canal. It became America's first national waterway in eighteen twenty five.

The difficulty of traveling through the Appalachian Mountains had kept many people from going west. The mountains also prevented people in the west from sending their wood and farm products east. But the canal overcame the natural barrier of those mountains. It helped open the American West. The Erie Canal made the United States a richer and stronger young nation.

BOB DOUGHTY: Politicians, businessmen, farmers and traders had talked about creating a canal connecting the Great Lakes with the Atlantic Ocean for one hundred years. A lawyer and politician named De Witt Clinton finally succeeded in getting the canal built.

As early as eighteen-oh-nine, Clinton saw the need for the canal. Then he had to defend his idea against people who laughed at him. Some critics called the canal "Clinton's Folly" -- a stupid project. In eighteen twelve, the federal government rejected a proposal to provide money for the canal.

But five years later, the New York State legislature provided more than seven million dollars for the project. The lawmakers named Clinton to head a committee to supervise the development of the canal. De Witt Clinton was elected governor of New York that same year.

MARIO RITTER: The Erie Canal was five hundred eighty-four kilometers long, more than eight meters wide and one and one-half meters deep. It could not have been completed without the hard and dangerous labor of many workers. Historians say about one-third of the workers had recently moved to the United States from Ireland. They received about fifty cents a day for building the Erie Canal.

The men used explosives to break the rocky earth. Many workers were injured. Many were infected with the disease malaria. Twenty-six workers died of smallpox. Some were buried in unmarked graves along the canal.

BOB DOUGHTY: Big guns were fired in October, eighteen twenty-five in Buffalo, New York. The cannons were part of a celebration to observe the completion of the Erie Canal. Governor De Witt Clinton and his wife left Buffalo on a barge called the Seneca Chief. The boat moved at the rate of less than five kilometers per hour. It reached the Hudson River nine days later. To mark the arrival, Governor Clinton dropped some water from Lake Erie into the Hudson River.

MARIO RITTER: Within ten years, the Erie Canal had repaid the cost of building it. Transportation of products by canal was less costly than other methods.The waterway carried barges. Most of these boats had flat bottoms for carrying goods. The barges measured up to twenty-four meters long and about four and a-half meters wide.

Mules and horses on land pulled the barges through the canal using ropes. Eighty-three devices called locks raised the barges on the canal by more than one hundred seventy meters from the Hudson River to Lake Erie. Men and animals worked hard to pull the barges.

BOB DOUGHTY: Over time, the canal grew. Many improvements were made between eighteen thirty-five and eighteen sixty-two. But a few years later, the canal began to lose importance. Trains were becoming an easier and more profitable way to transport goods.

As the Erie Canal was losing business, some of its levees began to break. Levees normally hold back the water, preventing floods. The breaks damaged the towpaths next to the canal and stopped travel.

Age or heavy rains often caused the levees to break. But the breaks were not always an accident. Forestport, New York, had been suffering from the closing of businesses. Then, in the last years of the eighteen hundreds, several area levees broke under suspicious conditions.

MARIO RITTER: Breaks in the levees should have been bad news for Forestport. Difficult repairs were needed. But few people in the town seemed sad about the breaks. Instead, many were pleased. Almost two thousand men were brought in to repair the damage. That was more than the normal population of Forestport.

People crowded into places to eat, drink and play games of chance. The town had money again. Life became as profitable and wild as it had been during the best days of trade on the canal.

Michael Doyle is a newspaper reporter who writes about legal issues for California newspapers. In two thousand four, he published a book called "The Forestport Breaks." For the book, he did research about his ancestors who had lived in Forestport. Mister Doyle said he learned that his great-grandfather took part in the wrongdoing.

At the beginning of the story, a farmer sees water flooding over a levee in Forestport. He warns local officials. His warning prevents more severe damage. But some of the townspeople give no praise to the farmer for his action. Instead, Mister Doyle writes that they want to kill him.

MARIO RITTER: By nineteen-oh-three, some businesses were pressuring New York to build a whole system of canals. These people did not want the railroads to completely control the transport of goods. So the state formed the New York State Barge Canal System in nineteen eighteen. The Erie Canal became the largest part, linked to three shorter canals.

The canal system stayed busy until nineteen fifty-nine. At that time, the United States and Canada opened the Saint Lawrence Seaway. This waterway permitted ocean ships to sail up the Saint Lawrence River and through the Great Lakes. The Erie Canal lost a lot of its business.

BOB DOUGHTY: But the Erie Canal and the other parts of the New York canal system got help. In nineteen ninety-one, people who cared about the historic canal held a big public event. The group is called Erie's Restoration Interests Everyone. It made the same trip that had celebrated completion of the Erie Canal in eighteen twenty-five.

As Governor and Missus Clinton had done, the group traveled from Buffalo, New York to the Hudson River. A man playing the part of De Witt Clinton dropped water from Lake Erie into New York Harbor.

MARIO RITTER: Today, an area called the Canalway National Heritage Corridor contains parts of the Erie Canal of the eighteen hundreds. You can walk, run or ride a bicycle in this area.

You may want to be adventuresome and paddle along in a small boat, like Harpham and Charles. Or, you can take a historic Erie Canal boat trip. Thousands of people do this every year.

The boat moves slowly along the water. You listen to guides tell about the animals and the men who pulled the barges. And, musicians play songs of the days when the Erie Canal was helping a young nation grow.