Update Required To play the media you will need to either update your browser to a recent version or update your Flash plugin.
By Jill Robbins
14 April, 2019

The Arizona tribes now have a new place to look: the state's wildlife agency. Under a new program, they can ask the state Game and Fish Department for animals that have died from illegal hunting or natural causes, or after being hit by a motor vehicle.

Agency officials, researchers and other employees then watch for the bodies as part of their normal duties.

"It's all just ... a collection of what we find out in the field," said Jon Cooley, the department's contact with over 20 tribes. 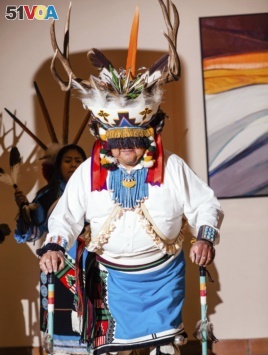 So far, the biggest demand for body parts comes from the Navajo Nation and the Hopi Tribe. The Navajo have collected bear and mule deer remains from the Arizona program. The Hopi have asked for turtle shells and bird feathers from wild turkey and water fowl. The agency also gathered turtle shells for the Pueblo tribes of New Mexico. The Pueblo often use shells as ankle or hand rattles in ceremonial dances.

If the animal parts are not too old, they are taken to several freezers across the state. Before, they would be left for other animals to eat, thrown away or even burned.

For years, the Game and Fish Department had been working informally with tribes to provide animal parts. Now, Cooley said the partnership is more official. The agency knows what kinds of parts are wanted because there is better communication between tribes and the wildlife agency.

Native American tribes traditionally have used all parts of an animal. Bones and deer antlers were made into weapons, spoons and knife handles. Clothing and shoes were made from the hair and skins of animals. Ceremonial objects are covered with feathers, bone breast plates and jewelry made of animal teeth.

Part of the animal meat was eaten as soon as it was killed, and some was dried and saved for later.

The department does not give away feathers from eagles or other federally protected migratory birds. The federal government has a storage center in Denver, Colorado for tribes to get eagle feathers legally. The Comanche Nation in Oklahoma and a wildlife rescue organization near Phoenix give feathers from hawks, falcons and other birds to members of federally recognized tribes.

In Arizona, the objects highest in demand are tortoise shells. Also on the tribes' lists are mountain lions, bison, deer, antelope, and game birds like turkeys. The requests are somewhat detailed, so Cooley said the agency does not want the public donating animals or gathering them from the roadside.

One animal Game and Fish employees will not store is a bear that has been shot with sleeping drugs. The chemicals could remain in the body and some tribes generally won't take animals that have been drugged, Cooley said.

While the Navajo and Hopi have received the most material so far, the plan is to include tribes in other states if Arizona tribes don't need what's there. Tribes in California, Nevada, Utah, Colorado and parts of Texas and Oklahoma will also be able to get animal parts from the storehouse, Cooley said.

The Arizona program appears to be the only one of its kind in the Western United States. States like New Mexico and Montana give people permission to collect animals that have been killed on the road. In Alaska, Native people may ask for permission to take wildlife from the road.

The Native American Fish and Wildlife Society brought up the idea of buying freezers at one of its conferences. The society would give them to the Arizona Game and Fish Department to store animals. "Everyone was on board; everyone was in support of it," said Darren Talayumptewa, who sits on the society's board of directors. The society purchased four freezers for use in Arizona.

"In the past, if the tribes had seen something dead, if it was roadkill, they would try to see how they could obtain it," He said that in the past " ... there was really no process for Native Americans obtaining various parts."

The Associated Press reported on this story. Jill Robbins adapted it for Learning English. George Grow was the editor.

informal – adj. of or related to an unofficial way of doing things

rattle – n. a device used to make a sound

antler – n. the horn of a deer or similar animal

migratory – adj. involving an animal that often moves from one place to the another

on board - expression. included among the group of people who support a goal or project

roadkill - n. animals that have been killed by being hit by cars and other vehicles

obtain - v. to gain or get (something) usually by effort

Do you use animal skins or bones for clothing or decorations? Tell us how you use them. Write to us in the Comments Section.