Update Required To play the media you will need to either update your browser to a recent version or update your Flash plugin.
By Jim Dresbach
26 September, 2016


American Arnold Palmer, known as "The King" of professional golf, died on Sunday in Pittsburgh, Pennsylvania.

The head of his company, Arnold Palmer Enterprises, confirmed that Palmer died from issues related to heart problems. He was admitted to a hospital Thursday, but his health reportedly worsened over the past few days.

Arnold Palmer is considered among the most important players in the history of golf. He won seven major championships and 62 other Professional Golfers' Association (PGA) Tour events.

Before Palmer's long career, golf was considered a sport mainly for rich people. Many Americans liked his aggressive style of play, and the way he seemed at ease with both presidents and the golfing public.

Palmer became a sports star at about the same time television moved into most American homes. His good looks, devilish smile and go-for-broke thinking helped make golf appealing to one and all.

"Thanks, Arnold, for your friendship... and a lot of laughs," Tiger Woods said through social media. "It's hard to imagine golf without you or anyone more important to the game than the King." 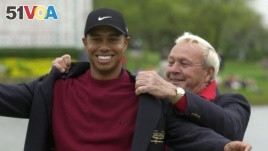 Arnold Palmer never like being called "The King" of golf, but the name stuck.

Palmer was a leader in sports marketing. He became one of the first athletes to earn millions of dollars by appearing in advertisements. Some 40 years after his last PGA Tour win, he still rates among the highest earners in golf. It is estimated Palmer was worth close to $675 million.

As a spokesperson for products, Palmer's image was everywhere. He made ads for motor oil, ketchup and financial services companies. Even as late as 2011, Palmer was No. 3 on Golf Digest's list of top earners at $36 million a year. Only Woods and Phil Mickelson earned more money.

As a golfer, Palmer became famous for winning and losing golf tournaments. Palmer came back from seven shots behind to win a U.S. Open Championship. And he once lost a seven-shot lead during the final nine holes to lose a U.S. Open.

Palmer was never dull. He would smoke cigarettes while playing as he attacked golf fairways, greens and holes. With powerful hands holding the golf club, Palmer would hit the ball with all his strength. Then he would twist his muscular neck as his eyes followed where his shot traveled.

Doctors told Palmer that he had prostate cancer in 1997. But the disease was found and treated early. He returned to golf a few months later.

Palmer designed some golf courses. And he was a success off the course. His name was used for a line of clothing and a drink combining iced tea and lemonade.

Palmer's other love was flying. He piloted his first aircraft in 1956.

Palmer flew airplanes the way he played golf. He set a record in 1976 when he went around the earth in 57 hours, 25 minutes and 42 seconds in a Lear 36 plane. He continued flying until he failed to renew his flying license at age 81. He was just short of 20,000 hours of flying as a pilot.

Through it all, he came into contact with more people than he could possibly remember. "I'm not interested in being a hero," Palmer said, suggesting that too much was made about his return from cancer. "I just want to play some golf."

style – n. a way of behaving or doing things

advertisement – n. something (such as a short film or a written notice) that is shown or presented to the public to help sell a product or to make an announcement

devilish – adj. showing a desire to cause trouble but in a way that is not serious

dull – adj. not exciting or interesting

fairway – n. the part of a golf course that has short grass and that lies between a tee and a green