Tiny Devices for Studying the Brain From the Inside

Update Required To play the media you will need to either update your browser to a recent version or update your Flash plugin.
By Pete Musto
24 September, 2016


In the future, very small wireless devices could be placed inside human brains to study and stimulate brain cells.

That is the goal of researchers at the University of California, Berkeley. University researchers have created extremely small sensors, called neural dust, to study brain cells. The word neural describes something related to the body's nervous system.

The researchers hope these sensors will treat conditions of the brain such as epilepsy. The sensors also could improve the brain's control of the devices used to replace missing or injured parts of the body, called prosthetics. 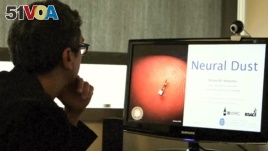 A scientist as the University of California, Berkeley works on the technology called 'neural dust.'

In 2003, Jan Scheuermann permanently lost the ability to move her arms and legs because of a disease called spinocerebellar degeneration. But she was able to feed herself using a robotic hand controlled by her thoughts in 2012.

Doctors connected a sensor to her brain using wires. The sensor received the commands from her brain and sent them to the robotic device.

Tiny wireless devices could be safer

Wires, however, can cause inflammation in the brain. University of California engineers hope to replace the technology Scheuermann used in 2012 with neural dust sensors. These sensors are smaller than a single piece of rice and use no wires.

Instead, the wireless sensors change high-frequency sound waves, transmitted by a device outside the body, into electricity.

The electricity powers the sensors that then can identify changes in the muscles or nerves to which they are attached. Finally the sensors send this information back to the device that first sent the sound waves.

Researchers attached neural dust sensors to nerves and muscles in the legs of rats and studied the signals the sensors produced.

The scientists hope to place neural dust directly into the brain in the future. They want to study brain function and hope the sensors will make it possible for people to use robotic prosthetics without being connected to a computer through wires.

Michael Maharbiz is one of the University of California researchers working on the technology. He says these new kinds of prosthetics could take many forms and serve many different functions.

He also says neural dust could operate in a similar way to devices called Fitbits. Fitbits are worn on a person's arm. They monitor physical activity as well as body functions such as heart rate.

Maharbiz says neural dust could act like a Fitbit inside the body that monitors nerve, muscle and organ activity as it is taking place. However, the sensors must be made even smaller to use in the brain.

Scientists now are working to create neural dust that is thinner than a piece of human hair.

Deborah Block reported on this story for VOA News. Pete Musto adapted it for Learning English. Mario Ritter was the editor. We want to hear from you. What new technologies do you think humanity with invent in the near future? How do you think these new technologies will change the world? Write to us in the Comments Section or on 51VOA.COM.

sensor – n. a device that can sense light, heat, sound, motion and provide information about it

function – n. a purpose or activity done by someone or something

monitor – v. to observe, to watch or record