Update Required To play the media you will need to either update your browser to a recent version or update your Flash plugin.
By Bryan Lynn
25 September, 2016


A popular travel blogger is being criticized for writing only good comments and posting fun videos from a trip to North Korea.

British world traveler Louis Cole posted the videos on his YouTube channel last month. The videos were recorded during a 10-day trip with a group of friends. His YouTube channel has nearly two million subscribers, and he has more than 800,000 followers on Twitter.

Some social media followers and the activist group Human Rights Watch criticized Cole for not showing the realities of life in North Korea.

One user responded to a photo Cole posted on Instagram of him surfing with a smiling North Korean boy. "You have to be realistic, man. Not everything is smiles and rainbows."

The user said Cole's information was usually realistic and useful for travelers. "I'm disappointed that you weren't just as honest and realistic on this latest trip. Sure, this was probably 100 percent orchestrated and you weren't allowed to film anything they didn't allow you to."

Cole says he purposely tried to focus on the "beautiful, positive things" from the trip. His videos showed him surfing, visiting a water park and sightseeing across the country. He did not focus on the fact that North Korean government officials controlled where he could go and who he could talk to.

After his visit, Cole released a video explaining his postings about the trip.

"I am not an investigative journalist. I don't really do political commentary and there are other places on the Internet you can go to find those kind of things..."

He denied a suggestion that he might have been paid by the North Korean government to make a propaganda video.

"The assumption I made, which may have been wrong of me, was that people watching my North Korea blogs would have already had a broader perspective on North Korea..."

Another social media critic said the video and photo postings did not show the real North Korea, "The one in which the majority of North Koreans live in poverty and have their rights stripped from them. The pictures you're posting are just a glimpse of what THEY want you to see."

The Deputy Director of Human Rights Watch for Asia, Phil Robertson, told VOA he agrees with the criticisms.

"Our concern was that this guy was portraying such a relentlessly positive message about North Korea that is completely out of line with what we know about the human rights abuses there."

A UN report documented between 80,000 and 120,000 political prisoners inside the country. It also linked North Korean officials to acts including murder, torture, rape, forced abortions and sexual violence. 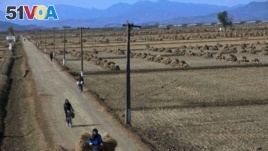 North Korean farmers pass along a road past farm fields at a collective farm near the town of Sariwon, North Korea.

"Many people saw our trip to North Korea & our positive interaction with people as controversial," he wrote. "It was moments like this, breaking down the barriers that separate this beautiful country from the rest of the world, that make me honored to have been a part of this group."

Robertson, however, said he does not believe the travel posts were building cultural bridges. He said Cole did not research the real North Korea and gave the country's government a lot of free publicity.

Brian Padden reported this story for VOANews. Bryan Lynn adapted it for Learning English. Mario Ritter was the editor.

Do you think this blogger should have included other information in his posts about North Korea? We want to hear from you. Write to us in the Comments section, and visit 51VOA.COM.

rainbow – n. curved line of different colors that can appear in the sky when the sun shines through rain

orchestrate – v. organize something to achieve a specific goal

assumption – n. something thought to be true without real proof

broader perspective - adj. see something from a larger point of view

glimpse – n. to look quickly at something, glance

portray – v. to describe something or someone

relentlessly – adj. continuing without stopping or getting weaker