Update Required To play the media you will need to either update your browser to a recent version or update your Flash plugin.
By VOA
29 August, 2017


At the top of the world, under the ice, lies a large number of natural resources. Gas, coal, uranium and other minerals, even diamonds, sit under the ice inside the Arctic Circle.

As climate change pushes the cold and ice farther north each year, discussion increases about how to get to those resources. Less ice also means possible new business in shipping, tourism and fishing.

But, industry experts, researchers and people in the far north say there are many problems in reaching those rich resources. People who want to protect the environment are against any large effort to take Arctic resources. They warn that the fragile environment could be harmed past repair.

The Northwest Passage, between the Atlantic and Pacific Oceans is one of the last unexplored areas of the planet. But, that is changing as more companies seek business possibilities in the frozen north. Ships are now taking passengers through the Arctic Circle. Last year, the cruise ship Crystal Serenity sailed through the passage. On board were 500 crew and 1,100 "adventure tourists," who paid at least $22,000 each for the four-week trip. 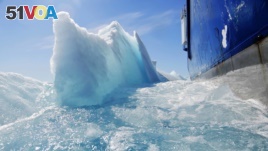 FILE - In this July 21, 2017 file photo, broken sea ice emerges from under the hull of the Finnish icebreaker MSV Nordica as it sails through the Victoria Strait while traversing the Arctic's Northwest Passage.(AP Photo/David Goldman, File)

The trip was unusual, however. Fewer than 500 ships have sailed through the passage since the first in 1906. Such trips require approval of almost 30 Canadian agencies, including Nunavut territory officials.

In addition to tourism, shipping companies may start using the passage to save on fuel costs.

Sailing through the passage cuts the travel distance between East Asia and Western Europe by more than 10,000 kilometers. Such travel usually moves through the Panama Canal.

However, businesses may want to do more than move through the area, like mine for resources.

"As the world demand for raw materials is ever increasing, and (with) a realization that a large part of the unexplored deposits are in the Arctic, there is a natural shift to focus on that area," said Mads Boye Peterson, head of Denmark's Nordic Bulk Carriers Shipping.

The Arctic is a 14.5 million square kilometer area around the North Pole. But, it is not all ice and ocean. It also has a mix of plant and animal life.

But there could be other resources also, like diamonds, uranium, phosphate, nickel, platinum and other minerals. Morten Smelror is the director of the Geological Survey of Norway.

He also said lithium and cobalt have been found in important amounts in the Arctic regions of Russia, the Nordic countries and Greenland. Lithium and cobalt are used to make batteries that power the growing number of electric cars and small electronic devices.

And the Arctic's huge Baffin Island holds large amounts of pure iron, which is used to make steel.

"The Arctic is certainly among the last frontiers with respect to undiscovered mineral resources, along with the deep oceans," Smelror said.

Countries in the Arctic region are making claims to land and resources in the area.

Greenland claims the Lomonosov Ridge, an underwater ridge, 1800 kilometers long. But Russia disputes the claim. The United Nations is working to settle the disagreement.

Russia also has claimed ownership of a large Arctic Ocean area and, ten years ago, placed a Russian flag underwater at the North Pole.

Canada and the United States also dispute ownership of parts of the Arctic region.

In April, U.S. President Donald Trump signed an executive order that cancelled restrictions on oil exploration in the Arctic and other places.


Anne Ball adapted this story for Learning English from VOA News and AP reports. Caty Weaver was the editor. We want to hear from you. Write to us in the Comments Section and visit us on 51VOA.COM.

cruise – adj. a kind of boat or ship that travels to a number of places for vacation

realization – n. the state of understanding or becoming aware of something

icebreaker – n. a special ship that can move through icy water by cutting the ice

complicated – adj. something that is sure to happen or be successful

Nordic – adj. of or relating to Sweden, Norway, Denmark, and sometimes Finland and Iceland, or to the people who live there

ice floe – n. a large, flat area of ice floating in the ocean

ice sheet – n. a very large and thick area of ice that covers a region

ridge – n. a long area of land that is on top of a mountain or hill