Australian Spider May be World’s Fastest

Update Required To play the media you will need to either update your browser to a recent version or update your Flash plugin.
By Bruce Alpert
26 June, 2016


Australia is home to many unknown species. Researchers now say that it may be home to the world's fastest lunging predator.

The karaops spider is a small and flat spider found only in Australia. The spider is a predator that gets its food by killing and eating other insects. It has eight legs and usually creates a web of sticky threads to catch insects for food.

Sarah Crews, 38, is a researcher at the California Academy of Sciences in San Francisco. She spent two months in the Australian Outback, collecting 100 karaops spiders.

Crews told the Australian Broadcasting Company, or ABC, that collecting the spiders was not easy. They usually hide under loose bark, often on eucalyptus trees.

She and her research assistant spent a lot of time turning over rocks to find and catch the speedy spiders.

"I've worked on these spiders, this family, for about 15 years now and I just don't really care about other spiders at all anymore," Crews told ABC. "I just like these guys."

The spiders will be examined with high-definition cameras at the Academy of Sciences. 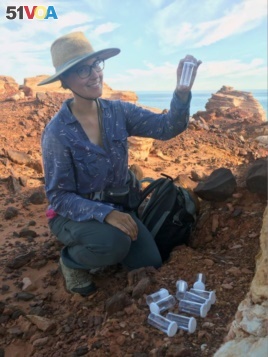 Linda Rayor is an expert on insect behavior, including spiders, at Cornell University in New York. She said Crews appears to be onto something about the unusual speed of karaops.

"I've tried catching some of these spiders and they are ridiculously fast," Rayor told VOA. "I study Aussie huntsman spiders, which are also very, very fast."

The karaops spiders are "even zippier," she said. By that, she means faster.

Robert Raven is the senior curator of spiders at the Queensland Museum in Australia. He says karaops are skilled hunters.

The website spiders.us says that most spiders eat insects and other spiders. Spiders larger than karaops have been known to eat small animals, such as rodents, the website reports.

The website tries to offer information it hopes will show some fears people have of spiders are not based on facts.

Rayor, the Cornell University insect expert, said the huntsman spiders she researches are more social than most.

"I am interested in the behavior and physiology that makes living in groups of cannibals possible," she said. "On a broader scale, spiders are so damned interesting and understudied that they are a behavioral researchers dream."

Australia is home to about 10,000 species of spiders. Only a third of the species have been identified so far.

lunging – adj. to move or reach forward in a sudden, forceful way

thread – n. a long thin line of something

eucalyptus tree – n. there are 700 varieties of these very tall trees

high-definition – adj. having a very clear picture and a wide screen

rodent – n. a small animal, such as a mouse, rat, squirrel, or beaver, that has sharp front teeth

physiology – n. a science that deals with the ways that living things function

cannibal – n. an animal that eats its own kind