How 3-D Printing Can Create Tissue from Stem Cells

Update Required To play the media you will need to either update your browser to a recent version or update your Flash plugin.
By Bryan Lynn
19 June, 2016


An Israeli company has asked the United States Patent and Trademark Office for legal rights to a process for making a special kind of human cell.

The company, Nano Dimension, says it uses a specialized 3-D printer to create an environment in which stem cells could grow into tissue.

Stem cells can develop into many different kinds of cells in the body. They can also repair damaged tissues and organs. One kind, called induced pluripotent stem cells (IPS), are used to replace tissues lost to disease or injury. 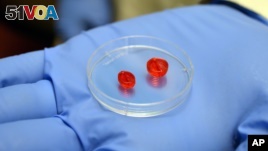 In this March 6, 2014 photo, a 3-D printer was used to construct these tiny two-ventricle cylinders at the University of Louisville, in Louisville, Ky. Researchers are working on a project to build a human heart using a 3-D printer and human cells. (AP Photo/Dylan Lovan)

The term 3-D is short for three dimensional. That means an object has length, width and height.

In 3-D printing, 3-D models are first created as files on a computer. The printer then uses a material like plastic or metal to create physical objects. The process involves making one layer at a time until the objects reach full form.

Usually this process is slow. But Nano Dimension said it has tested a 3-D printer that can produce stem cells much faster.

Nano Dimension is partnering with another Israeli company, Accellta, a developer of proprietary technologies to produce IPS cells. The patent application request describes the 3-D printing process for making human tissues and organs.

The companies have yet to produce fully functional human tissue for medical use.

Amit Dror is the head of Nano Dimension. He said testing has so far resulted in a "proof of concept" for 3-D printing stem cells.

"What we have proven [is] that we have the ability - by combining the know-how and IP [intellectual property] of both companies - to get to the right materials. And basically being able to print very fast, an array which resembles a tissue by using human stem cells."

The goal is to create the right mixture that copies actual conditions in the human body.

"It's not that every layer of tissue within an organ, or skin, or any part of the body, has just a mixture of cells," Dror noted. "They are located in different concentrations in different places."

Developing stem cells into life-like, functioning tissue has long been a problem for researchers.

William Wagner is the director of the University of Pittsburgh's McGowan Institute for Regenerative Medicine. He says 3-D printing technology can be very useful.

"Let's say you're looking at a drug that would fix liver disease that causes the liver to not be able to enzymatically degrade some substance. Now you have the ability to do a thousand experiments in parallel, with liver tissue, with your drug, assessing the effectiveness of it."

Wagner added that he believes production of complex human tissues, such as full organs, is still years away from happening. So 3-D printing would likely be more successful in producing simpler tissues like skin or muscle, he said.

George Putic reported on this story for VOANews. Bryan Lynn adapted it for Learning English. George Grow was the editor.

We want to hear from you. In what ways do you think 3-D printing technology will change our lives? Write to us in the Comments section, and visit 51VOA.COM.

proof of concept – v. evidence gained from an experiment or project

proprietary – adj. something produced and used under an exclusive right

resemble – v. appear similar to something else

ink – n. colored liquid that is used for writing or printing

concentration – v. amount of substance contained in something

parallel – adj. placed side by side