Update Required To play the media you will need to either update your browser to a recent version or update your Flash plugin.
By Bryan Lynn
03 October 2021


A California company is using robots to grow plants in greenhouses that it says use 90 percent less water than traditional farms.

The company, Iron Ox, operates several greenhouses and has plans to expand. It recently announced a new $50 million investment. The financing was led by Breakthrough Energy Ventures, a company established by Microsoft founder Bill Gates.

At a 930-square meter center in Gilroy, California, Iron Ox uses a self-driving robot named Grover to transport containers of plants. The large greenhouse uses hydroponics, a system designed to grow plants in materials other than soil, such as water. 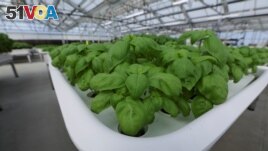 The company says each container, known as a module, carries 30 liters of water and about 70 seedlings as it moves. Another machine uses robotic arms to lift the top of the plants out of the water. This permits the roots to be inspected. Sensors also examine the water, measuring levels of nitrogen and acidity.

Sarah Osentoski is the company's senior vice president of engineering. She told Reuters news agency she believes robots like these can help prepare for a more sustainable future. "I think it's a really exciting way we can move forward in agriculture right now," Osentoski said.

"I really believe that we need to grow in a way that could feed the future of the world without hurting the Earth," she added. "So, a big part of our mission is to grow more with less."

The company notes that in its greenhouses, any water not used can be pumped back into the system to be reused later.

Agriculture is an important part of California's economy. But water usage has increasingly become a concern. The last major drought in 2012-2017 cut water for farmers, forced household usage limits and fueled deadly wildfires.

Iron Ox currently grows Thai basil and strawberries and is working on cilantro, parsley, and tomatoes. The company plans to build a new 50,000-square-meter greenhouse in Lockhart, Texas. There, the robots will be moving about 5,400 modules.

Iron Ox CEO Brandon Alexander told Reuters that building the company has been "an eye opener" for him and others. "I think we're now at a stage where most people understand that conditions are only getting worse," he said.

The system includes another inspection station that uses overhead cameras to capture three-dimensional (3D) images of the plant. Scientists use this data to study crop production levels.

"We want to give each plant exactly what it needs and nothing it doesn't," Alexander said. After the sensors examine the plants, the system provides suggestions for what is missing. "What does that plant need that we're not giving it."

Sarah Osentoski sees the robotic, indoor system expanding in the coming years to become a scalable model. "I think it's a really interesting way to bring modern technology in a controlled setting to agriculture. And it lets us do things that grow in ways that are really unique and different," she said.

venture – n. a new business activity that may or may not be successful

acidity – n. the amount of acid in substance

stage – adj. a period of development

scalable – adj. able to grow or be made larger

unique – adj. different from most other things