Update Required To play the media you will need to either update your browser to a recent version or update your Flash plugin.
By Pete Musto
23 May 2020


The coronavirus crisis has taken much of the university experience away from students in the class of 2020.

It has ended their study early, disconnected friendships and taken away the last memories of their college days. It may harm their career possibilities as the world enters an economic downturn. It has even robbed them of the traditional graduation ceremonies as social distancing limits large gatherings.

But while graduates' friends and family may not be able to cheer as they walk across a stage to receive their diploma, many schools have found ways to honor students online.

In the United States and elsewhere, an important part of graduation ceremonies is a message from well-known or respected artists, activists and politicians. These people usually give a speech offering advice to the graduates for their next steps in life.

This year was no different except for the fact that these speakers were not standing in front of crowds of thousands. They made these speeches from home or shared pre-recorded videos online. And students and their loved ones watched on their computers or smartphones, also at home.

On May 4, American actor Tom Hanks, a COVID-19 survivor, surprised graduates of Wright State University's Department of Theatre, Dance and Motion Pictures. He made an appearance right before the start of the Dayton, Ohio school's online graduation ceremony.

"You are the chosen ones," Hanks told the students. "You started in the olden times, in a world back before the great pandemic of 2020. You will talk of those earlier years in your lives in just that way."

Former U.S. president Barack Obama also gave a speech online to graduates of American historically black colleges and universities, or HBCUs, on May 16. Obama did not just offer words of advice, he also criticized how current world leaders are dealing with the crisis.

"You're going to have to grow up faster than some generations," Obama said. "More than anything, this pandemic has fully, finally torn back the curtain on the idea that so many of the folks in charge know what they're doing. A lot of them aren't even pretending to be in charge. If the world's going to get better, it's going to be up to you." 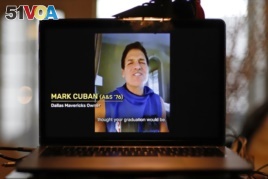 In this April 26, 2020, file photo, University of Pittsburgh graduate Dallas Mavericks owner Mark Cuban congratulates members of the Class of 2020 during a virtual commencement on a computer screen in Pittsburgh.

"I'm also missing my graduation ceremony [from Oxford University] this year," Malala said. "For most of us this is temporary. We'll continue our education and follow our dreams. But many girls especially in developing countries ... will be forced into early marriages or low-paying jobs to support their families ... So, I ask you to remember them today as you go out and change the world. Don't leave them behind."

Still, some colleges and universities have made different plans for graduation.

Arizona State University turned to robots for the traditional ceremonies at the Thunderbird School of Global Management. Graduates took turns moving a robot across the stage to receive their diploma as friends and family watched online.

At Rice University in Houston, Texas, officials are holding an online event with no guest speaker. Others are avoiding online events entirely. And graduates at the University of California, Berkeley, say they want their own in-person celebration at a later date.

However, the United States Military Academy class of 2020 has no choice. Last month, President Donald Trump said he would want to give the graduation speech in person. School officials have since announced that the graduates will return for the ceremony at West Point, New York on June 13.

Pete Musto wrote this story for VOA Learning English with reports from the Associated Press. Hai Do was the editor.

torn back the curtain – idm.

rapper – n. a person who performs rap music or speaks the words of a rap song