Update Required To play the media you will need to either update your browser to a recent version or update your Flash plugin.
By Hai Do
05 October, 2018


The Nobel Peace Prize was awarded Friday to Congolese doctor Denis Mukwege and Yazidi activist Nadia Murad. The two were honored for their work against the use of sexual violence as a weapon of war.

The Norwegian Nobel Committee said they "have made a crucial contribution to focusing attention on, and combating, such war crimes."

The committee noted that "Denis Mukwege is the helper who has devoted his life to defending these victims. Nadia Murad is the witness who tells of the abuses perpetrated against herself and others."

Mukwege founded a hospital in eastern Congo's city of Bukavu and has treated thousands of victims of sexual violence. Armed men tried to kill him in 2012, forcing him to temporarily leave the country.

Mukwege was in the operation room when he was told the news of his award. He said, "I can see in the faces of many women how they are happy to be recognized." 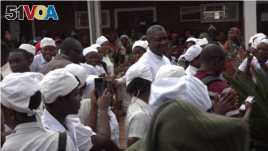 FILE - Denis Mukwege is seen with patients at the the Panzi hospital he runs in Bukavu, eastern DRC. (E. Muhero/VOA)

"This becomes your normal day"

Nadia Murad is a human rights activist who, in the words of the committee, "has shown uncommon courage ... in speaking up."

Murad wrote "The Last Girl" to tell the story of her capture, the loss of her family and her escape. "At some point, there was rape and nothing else. This becomes your normal day," she wrote. 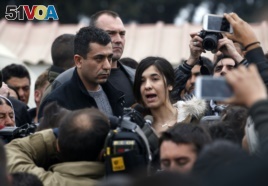 "We want to send a message"

Berit Reiss-Andersen is chairwoman of the Nobel committee. She said, "We want to send a message that women who constitute half the population in those communities actually are used as weapons and that they need protection, and that the perpetrators have to be prosecuted and held responsible."

Congo's opposition leader Felix Tshisekedi said, "I am proud to be Congolese." He also wrote on Twitter, "Good done for others always ends up being rewarded."

In Iraq, state TV stopped regular programming to report on Murad's win. Iraqi Prime Minister Haider al-Abadi congratulated her on the award. And a Yazidi member of Iraq's parliament said, "It is the victory of good and peace over the forces of darkness."

Both honorees are the first from their countries to receive a Nobel Prize. The 2018 prize is worth 9 million Swedish kronor, about $1.01 million.

Hai Do adpated this story for Learning English based on Associated Press and Reuters news reports. Kelly Jean Kelly was the editor.

devote - v. to use (energy, attention, time, resources..) for something or someone

perpetrate - v. to do something that is wrong

prosecute - v. to hold a trial against a person who is accused of a crime