Update Required To play the media you will need to either update your browser to a recent version or update your Flash plugin.
By VOA
15 August, 2015


Chinese state media report the death toll from powerful explosions in the Chinese port of Tianjin has risen to 104. It says at least 21 firefighters were among those killed.

Chinese officials ordered an immediate evacuation near the site of the huge fire and explosions Wednesday night. The blasts happened at a chemical storage building in an industrial neighborhood in the northeastern city.

The Beijing News on Saturday said all people within a three-kilometer distance of the warehouse are being forcibly removed from the area. Officials reportedly are concerned about a possible poisonous chemical spread. 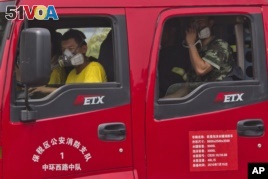 Chinese firefighters wear masks as they wait in their truck near the site of an explosion in northeastern China's Tianjin municipality, Aug. 15, 2015.

The newspaper reported that police said sodium cyanide was discovered east of the site. The chemical can kill. A team of more than 200 military nuclear and biochemical specialists has been searching the area for possible dangerous chemicals.

The official Xinhua news agency said anti-chemical warfare troops rescued a man Saturday 50 meters from the blast center. The People's Daily said the 50-year-old man was rescued from a container around 2:00 p.m. local time, nearly three days after the explosion.

Chinese Central Television reported that rescue operations were suspended Saturday after a new fire broke out. The broadcaster said a car damaged during the explosion caught fire.

Hundreds of people remain hospitalized. Local officials have discovered several poisonous materials near the explosion site. However, they have repeatedly said that air and water quality in the city remains normal.

Investigators still do not know what caused the explosions, which sent huge fireballs into the night sky. The powerful shockwaves also shattered glass several kilometers away.

toll – n. the number of people who are killed or injured in an accident, disaster, war, etc. — usually singular

evacuate– v. to remove (someone) from a dangerous place

shatter – v. to break suddenly into many small pieces