Update Required To play the media you will need to either update your browser to a recent version or update your Flash plugin.
By VOA
14 August, 2015


There is a change in the air at the Tea Factory in Thika, Kenya. It is free of the dark smoke that rises from the boilers of Kenya's other tea factories.

The Makomboki company has begun to use a less costly and more environmentally friendly fuel. Instead of burning wood, the tea maker is burning briquettes made of plant and animal material waste.

The Kenya Tea Development Authority supervises 66 tea factories in the country. Makomboki is the only one that does not use firewood in tea production. 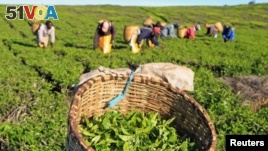 Its factory is deep in central Kenya's hilly and fertile tea-growing Muranga county. The Makomboki employees there feed the factory's boilers with briquettes of macadamia, cashew and rice husks – the dry outer covering of the seeds -– mixed with sawdust.

From firewood to briquettes

In 2010, the International Trade Center started a training project. It aimed to teach Kenyan tea makers new production methods that would help limit the release of climate change gases.

As a result, Makomboki company leaders decided to change their fuel source from firewood to briquettes. Since then, the factory has increased its use of alternative fuels and stopped depending on firewood.

Taylors of Harrogate is a Makomboki client. The British tea and coffee company helped the Kenyan factory change fuels. It connected Makomboki with the Living Earth Foundation. The non-governmental group donated the machines to make the briquettes.

The husks for the briquettes come from other factories within Muranga and Kiambu counties. The sawdust comes from mills near the tea factory.

John Gitau said it takes the factory six months to produce about 2.5 million kilograms of tea. During that time, their boilers would use up to 10,000 cubic meters of wood – or about 30,000 trees worth.

He said by trading firewood for sawdust and briquettes, Makomboki alone will have saved 60,000 trees in one year. And, he said, if all the factories in Kenya did this a lot of trees would be saved.

Mary Njenga is a post-doctoral fellow of bioenergy at the World Agroforestry Center. She welcomes the use of sawdust in the making of fuel briquettes. She said burning sawdust is efficient.

"The temperatures inside the boilers of tea factories are so high," she said, "they are able to more fully burn the particulate matter and the carbon dioxide so that little is released."

Makomboki manager John Gitau said tea factories that continue to use firewood can't ignore their own part in the adverse effects of climate change.

The move away from firewood also makes financial sense.

John Gitau said representatives from other factories have visited Makomboki to learn more about the alternative fuel. He said he hopes they will follow his company's lead.

Reuters reported this story. Marsha James adapted it into Learning English. Caty Weaver was the editor.

briquette – n. a block of compressed charcoal or coal dust used as fuel.

husk –n. a thing, dry layer that covers some seeds and fruits

scaled up – phrasal verb. to make something larger in size, than it used to be