Update Required To play the media you will need to either update your browser to a recent version or update your Flash plugin.
By VOA
17 October, 2015

Hillary Clinton – the front-runner and former Secretary of State – debated mostly with the popular Bernie Sanders, a senator from Vermont.

But many analysts say the clear winner was the Democratic Party. 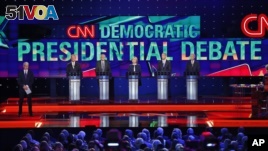 Unlike the Republican debates, the Democrats were generally polite and supportive with each other. Clinton and Sanders took a swipe here and there, but the tone was mostly civilized.

A high point of the debate was when Mr. Sanders stood up for Ms. Clinton. She was questioned again by the moderator about her use of a private email account as Secretary of State. While not illegal or against policy, it cast doubt upon her character.

"Let me say something that may not be great politics," Mr. Sanders said, meaning he could hurt his chances by agreeing with her.

"But I think the secretary is right, and that is that the American people are sick and tired of hearing about your damn emails!"

"It is a partisan vehicle, as admitted by the House Republican majority leader," she said, "to drive down my poll numbers."

More than 15 million people watched the debate on television and the Internet, according to CNN, the network that hosted the event. It lasted two hours.

In September, CNN hosted a more crowded Republic Party debate that drew about 22.9 million viewers. It was the most-watched program in the network's 25-year history.

Mr. Sanders and Ms. Clinton sometimes clashed over issues including gun control, economic policy, and the role of the U.S. military overseas.

Mr. Sanders defended gun rights for hunters in rural states like Vermont, his home state. He drew the line at sales of military-grade arms and ammunition sold to individual citizens.

A looming question remains whether Vice President Joe Biden will enter the race. Mr. Biden says he has not made up his mind.

Draft Biden is known as a "super PAC," or a fund-raising group that collects enormous sums of money to fund a candidate or issue.

Clinton's strong performance in the debate Tuesday makes it less likely that Biden will choose to enter, according to political analysts.

"By taking Sanders on directly, by being well-versed on the issues, it makes it harder – not impossible, but harder – to explain where the vacuum in the current Democratic field is that Biden would fill," said analyst Craig Veroga.

A new poll released Monday showed 48 percent of Democrats surveyed wanted Biden to join the race. If he were running, the poll said Clinton would still be the leader, with Sanders running second and Biden in third with 17 percent support.

"He could shake things up," political scientist Christopher Wlezien with the University of Texas told VOA. "But my sense is that it's probably less true after tonight."

Kathleen Struck adapted this story for Learning English. Hai Do was the editor.

occasional – adj. not very often, every now and then

take a swipe – idiom, to try to hit someone or to criticize someone

persistent – adj. to make a point over and over

partisan – n. strong supporter of one party or one cause

looming – v. to hang over in a way that is threatening

Now it's your turn.