Update Required To play the media you will need to either update your browser to a recent version or update your Flash plugin.
By VOA
06 September, 2015


In 2013, President Barack Obama launched a campaign called the Power Africa Initiative. Its goal is to increase the availability of electric power in African countries south of the Sahara Desert. Millions of people there are unable to depend on reliable power supplies.

The American-supported program is providing money for a number of projects, including one that creates electricity from human waste.

"Mukuru Kwa Njenga" is the name of a community close to Nairobi where about 100,000 people live. Many of them are poor. Until recently, most did not have electricity. Those who did had illegal connections to power lines. 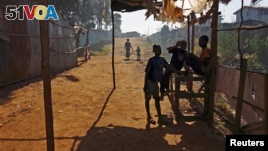 In this 2015 file photo, children shelter from the sun under a market stall in the Kibera slum of Kenya's capital Nairobi. (REUTERS/Darrin Zammit Lupi)

Amos Nguru had the idea for Afrisol Energy, a project that produces electricity from human waste. Two years ago, Mr. Nguru received an offer of financial support from the Power Africa initiative. The money came from General Electric and the United States African Development Foundation.

The project now produces 15 kilowatts of electricity. That is enough to power a nearby school and serve the local neighborhood. Mr. Nguru says his project meets the needs of the community.

Deborah Mwandagina is deputy head teacher of the local primary school. She says in the past, there were too many illegal connections to her school's power supply. She says this resulted in higher costs for the school, so it decided to stop using electricity.

She says, "We have been having challenges from the slums and time and again they hack our power systems and they connect illegally to their homes. We have been having such kind of challenges so we just decided we cannot live with electricity. It can't do us any good, so we decided to disconnect."

But now the school is once again using electricity from Afrisol Energy. Doreen Kemunto is a student at the school. Her mother Beatrice Onchan'ga says darkness no longer limits the time when Doreen can study.

The World Bank says only 23 percent of Kenyans have access to electricity.

Lenny Ruvaga reported this story from Nairobi. Christopher Jones-Cruise adapted it for Learning English. George Grow was the editor

access – n. a way of getting near or at something or someone

reliable – adj. able to be trusted to carry out agreements; dependable

convert(ing) – v. to change (something) into a different form or so that it can be used in a different way

generate – v. to produce something

sanitation – n. the process of keeping places free from dirt, infection and disease by removing waste, trash and garbage and by cleaning streets

slum(s) – n. an area of a city where poor people live and the buildings are in poor condition

hack – v. to secretly and illegally gain access to information or resources, such as power or the Internet

Do people in your country have access to electricity? We want to hear from you. Write your thoughts in the comments section.