Update Required To play the media you will need to either update your browser to a recent version or update your Flash plugin.
By VOA
03 September, 2015


When Turkey holds parliamentary elections in November, all eyes will be on a small pro-Kurdish party as a major influence.

The HDP, a pro-Kurdish party, won enough votes in June to join Parliament for the first time. Kurds traditionally have been outliers in the Turkish political process.

But their success at fighting the terrorist group ISIS has gained them more power in Turkey. Meanwhile, the Turkish government has continued to use military force against the Kurds, The New York Times reports. 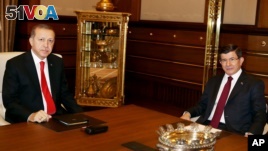 The HDP's electoral success hurt the majority AK Party, and President Recep Tayyip Erdogan, as well. Mr. Erdogan wants to create an executive presidential system for Turkey. That would give him, the president, more power by taking it from Parliament.

Observers say that the HDP would have to receive less than 10 percent of Turkish votes for AK to get a clear majority. A party must win at least 10 percent of the vote to win seats in Parliament, according to Turkish law.

Sinan Ulgen works at Carnegie Europe in Brussels. He says he thinks the fighting between Kurdish rebels and Turkish forces will take votes away from the HDP.

"There may be a hope on the AKP side that as a result of the cycle of violence, HDP may not be able to clear the 10-percent threshold. "That would generate a clear AK majority, or AK Party super-majority, which may allow Erdogan to move forward with a new constitution and achieve his ambitions to introduce (the) executive presidency."

President Erdogan has tried to convince voters that the HDP is linked to the Kurdish rebel group, PKK. He has called it a terrorist party, adding that the party's parliamentary deputies should be tried.

Soli Ozel studies international relations at Kadir Has University in Istanbul. He says the renewed fighting with the PKK is a product of party politics.

Securing conservative Kurdish voters will be important to the AK Party's goal of driving the HDP out of parliament. Before the elections in June, Kurdish voters were evenly divided between the AKP and pro-Kurdish parties.

Semih Idiz writes commentaries for Turkey's Cumhuriyet newspaper. He thinks President Erdogan may have made a political mistake.

"AKP in the past could garner some support from the Kurdish parts of Turkey. If Erdogan's advisers are expecting the situation now to scare the Kurdish voters back to the AKP, well, I think this is a very gross miscalculation and that is where it will definitely backfire. This "in effect, means that the HDP will again pass the 10-percent threshold and enter parliament, and at the end nothing will have been achieved."

HDP co-leader Selahattin Demirtas has called on the PKK to observe an immediate cease-fire. The group has rejected the appeal. The rebels say they will not honor a cease-fire unless Turkish forces stop fighting. Still, observers say the party leader's call is important to his electoral success. They say it shows the HDP wants to be part of the solution to ending the fighting, not part of the problem.

electoral – adj. of or related to voting or an election

executive – adj. relating to the job of directing other people in a company or organization; leadership

cycle – n. a series of repeated events or actions

threshold – n. the point at which something begins, changes or peaks

generate – v. to make or produce

introduce – v. to make known; to cause; to make available

reignited – v. to re-set a fire; to give life to something

garner – v. to collect or gather; to receive

definitely – adj. not likely to change; for sure

backfire – n. the opposite result of what was desired or expected