Epilepsy Disorder Suffered By Millions Around the World

Update Required To play the media you will need to either update your browser to a recent version or update your Flash plugin.
By VOA
17 December, 2012

From VOA Learning English, this is SCIENCE IN THE NEWS in Special English. I'm Shirley Griffith.

And I'm Bob Doughty. Today we will tell about the brain disorder known as epilepsy. Many people do not understand epilepsy. Medical experts are working to understand it and improve the lives of those who suffer from it.

Epilepsy is a medical condition that produces seizures. A seizure happens when a sudden increase of electrical activity interferes with normal operations in the brain. 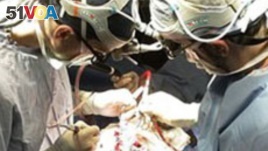 Exploring the Mysteries of Epilepsy
Nerve cells use electrical particles to communicate with each other. Millions of electrical particles pass between nerve cells in the brain. When the brain has a sudden burst of electricity, the body experiences physical changes called epileptic seizures. Victims can shake uncontrollably for brief periods. They also can temporarily lose the ability to think clearly or communicate.

New research is helping to explain how cells communicate to cause conditions like epilepsy. Douglas Fields is a researcher with America's National Institutes of Health. A few years ago, he showed that a chemical called ATP could be linked to disorders like epilepsy and chronic pain.

Most seizures can last anywhere between 30 seconds and two minutes. These seizures do not cause permanent damage. However, a seizure is considered a medical emergency if it lasts more than five minutes. One in 10 adults will have a seizure during their life.

Different kinds of seizures result when different parts of the brain are affected. If electrical activity increases in only one area of the brain, the person will have what doctors call a partial seizure. Many times, people may suffer a partial seizure and not know it. They might note strange feelings in an arm or leg. They also might hear noises or look straight ahead for a few minutes.

Sometimes the individual will have an uncontrolled movement, like turning the head to one side. Most partial seizures last less than 90 seconds. So it is not always possible for others to recognize them as signs of a disorder.

When people hear the word seizure, they often think of what doctors call a grand mal seizure. A person experiencing this kind of seizure will fall to the ground. His or her body will become firm and start to shake. After a few minutes, the individual will stop moving, appear awake and know what has happened. He or she may move slowly for about 30 minutes. Some grand mal seizures start with partial seizures and become worse.

Experts have reported different reasons why an individual may suffer epileptic seizures. For example, older adults may develop epilepsy because of an infection, stroke, or Alzheimer's disease. Head injuries or a lack of oxygen at birth may damage the electrical system in the brain. Other causes are poisoning and high body temperatures.

In early 2012, researchers in Australia reported finding a genetic cause for epilepsy in babies. Researchers from the University of South Australia and the University of Melbourne studied 23 families. Earlier testing showed they all had one or more family members with a condition called benign familial infantile epilepsy.

The researchers identified the cause as a single mutation, or change, in the structure of a gene known as PRRT2. Genetic testing showed the mutation affected 19 of the 23 families.

University of South Australia's Susan Heron said babies with the disorder often suffer seizures from the age of six months. The children outgrow the seizures after a year or two, but can develop a movement disorder.

The World Health Organization estimates that 50 million people around the world have epilepsy. Nearly 90 percent of cases are in developing countries. The WHO says many people in these areas suffer from epilepsy because of local conditions. In developing countries, people have a greater chance of experiencing a medical condition or disease that can lead to permanent brain damage.

The WHO says misunderstandings about epilepsy have resulted in laws against people with the disorder. For years, it was not illegal for American businesses to discriminate against individuals who suffered seizures. Now, a law called the Americans with Disabilities Act of 1990 protects the civil rights of people with disabilities in the United States.

The World Health Organization says many people with epilepsy receive no treatment. However, many treatments are available.

Generally, medicine is the first treatment of choice for epilepsy. The Epilepsy Foundation of America says different kinds of medicines can stop or control different kinds of seizures. There are now more than 20 kinds of drugs on the market. These drugs work best only after they reach what experts call a desired level in the body. It might take months to identify the right drug to control the disorder because each one may cause problems. These include weight gain or loss, eye or stomach problems, sleepiness and loss of balance. Some people may suffer depression, or have problems thinking or talking after taking some drugs.

In 1997, the United States Food and Drug Administration approved the use of a treatment called Vagus Nerve Stimulation for some seizure patients. It is designed for adults and young people who have partial seizures that are not controlled in other ways.

In this treatment, electrical energy enters the brain through the vagus nerve in the neck. The electricity comes from a small power supply placed under the skin in the chest. Medical experts set the device to provide a small amount of energy every few minutes. The patient can also send a few seconds of energy through the nerve if he or she feels that a seizure is near. This has been known to stop a seizure.

The Epilepsy Foundation says people using Vagus Nerve Stimulation still must take anti-seizure medicines. But the amount may decrease as the treatment continues.

Another treatment is an operation to remove the part of the brain suspected of causing epileptic seizures. This is done only when medicines fail to control the disorder. One requirement for the operation is that doctors be able to remove the suspected area without damaging speech, memory or other abilities.

Other kinds of operations can block the spread of electrical activity in the brain. The Epilepsy Foundation says doctors are performing more operations now because new information has increased their safety. Still, some people get no help from operations and others continue to need medication for their seizures.

Some people with epilepsy may be able to control their seizures by controlling what they eat. The ketogenic diet was developed in the first part of the twentieth century. It is very high in fats and low in carbohydrates. It makes the body burn fat for energy instead of sugar.

This diet requires family cooperation if the patient is a child. It also requires trained medical supervision. The patient must be in a hospital for the first part of the treatment. The amount of food and liquid the patient can have at each meal must be carefully weighed for each individual. The patient should obey the dietary restrictions for at least one month before experts know if the treatment is successful.

The Epilepsy Foundation says about one third of children on the ketogenic diet become seizure-free or almost seizure-free. Another third improve but still experience some seizures. The others cannot continue with the diet or it has no effect on their seizures.

Possible effects of the diet include digestive problems, loss of fluids in the body, and development of kidney stones or gall stones. Another danger of the diet is that high levels of fat could develop in the blood.

People being treated for epilepsy in one of these ways can still suffer an unexpected seizure. So what can you do if you see someone in this situation?

Experts say the most important thing is to keep the individual safe until the seizure stops. Stay with the person. Clear the area of anything that could cause harm. If you can, turn the body on one side. Do not force the mouth open or hold the person down. The seizure will stop on its own. Then speak to the person calmly and offer help to get home.
Related Articles
go top