Pow! Whizz! What Are Onomatopoeia?

Update Required To play the media you will need to either update your browser to a recent version or update your Flash plugin.
By Pete Musto
23 October, 2015


The world is full of different sounds. Some sounds are pleasing to hear, like a bird's voice. Other sounds hurt your ears, like a loud machine. But how do we explain in words what a sound is? For example, how do you describe the sound a dog makes? Also, does everyone hear that sound the same way?

Let's say you walk past an angry dog. What sound does the dog make? 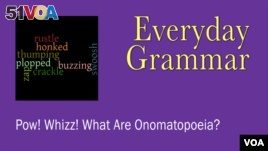 Everyday Grammar: What Are Onomatopoeia?

The noises animals make are not the only examples of onomatopoetic words. Imagine you are walking down a street on a rainy day. A car drives by very fast. Zoom. As the car passes you, it drives through some water. Splash. You close the front of your jacket to protect yourself. Zip. These words are all nouns that express the sound effect you are hearing.

Some sounds even define the objects that make them. Do you remember closing your jacket to protect yourself? The zipper is the object that connects the front parts of a jacket by joining the sets of metal teeth along the edges.

In comic books, we often see these sound effects written in the pictures. These words help the reader imagine sounds in the story.

Onomatopoetic words are not only nouns, though. Imagine you are in a quiet restaurant. Suddenly, the people next to you start to have an argument.

Anna: I can't believe you lied to me!
Jonathan: Shhhh! We are in public!
Anna: Don't shhhh me!

When you tell someone shhhh, you are saying the situation requires quiet. In the conversation you just heard, Anna responds to Jonathan by saying "Don't shhhh me." In this case, Anna is using shhhh as a verb. She means to say, "Don't tell me to be quiet."

Another example is one you probably hear every day. When you use a computer, you choose objects on the screen using a device called a mouse. Click. But, the action of choosing an object on a computer screen using a mouse is called clicking.

Now think back to the car passing you very quickly in the rain. What was the sound it made? Zoom. But, you can also say, "The car zoomed by me." This means the car drove by you at a very high speed.

Sometimes, onomatopoetic words are even used as adjectives. If you see something explode, you will often see the word boom used to describe the sound. This is because the sound of an explosion is low and deep, the way English speakers pronounce the word boom. Now listen to the actor James Earl Jones.

"Look, I can't tell you the secret of life, and I don't have any answers for you. I don't give interviews and I'm no longer a public figure. I just want to be left alone."

His voice sounds low and deep. You could say his voice is booming.

Onomatopoetic words are not often used in formal language. But they are very common in everyday speech and there are hundreds of examples. They make languages more creative. Writers and musicians have used these types of words for many years to find a connection with the natural world.

Just listen to the music group Ylvis as they make an entire song about onomatopea!

But there's one sound that no one knows
What does the fox say?

Pete Musto wrote this story for Learning English. Adam Brock was the editor.

pronunciation – n. the way in which the sound of word or name is made

comic book(s) – n. a magazine that is made up of a series of drawings that tell a story or part of a story

screen – n. the part of a television or computer that you look at when you are using it

creative – adj. having or showing an ability to make new things or think of new ideas