Executions on the Rise in Some Nations

Update Required To play the media you will need to either update your browser to a recent version or update your Flash plugin.
By Bruce Alpert
15 December, 2016


Twenty-five countries executed 1,634 people in 2015. That is the highest number of executions worldwide in 25 years.

The information comes from the rights group Amnesty International.

Three countries -- Iran, Pakistan and Saudi Arabia -- carried out 89 percent of the executions last year, the group said. The numbers do not include executions in China. 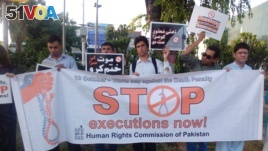 Amnesty International said it believes the Chinese government executes thousands of people every year. But the exact number cannot be learned because the government keeps that information secret, Amnesty said.

Death Sentence Back in Pakistan

In 2014, Pakistan resumed non-military executions after a terrorist attack on a school in Peshawar. The attack killed 144 people, mostly children.

Last year, Pakistan executed 326 people for terrorist activities and other crimes, Amnesty International said. It said people tried and found guilty of murder and blasphemy were also put to death. Blasphemy is speaking or acting against the established religious beliefs.

The Congress in the Philippines is considering President Rodrigo Duterte's proposal to re-establish the right to execute criminals. His plan would permit executions for crimes such as murder, rape, kidnapping and drug offenses.

When Duterte campaigned for the presidency, he promised to lead a war on crime, particularly drug crimes. He also said he would bring back the death penalty.

Executions were banned in 2006 by then-President Gloria Arroyo.

On Monday, President Duterte said that when he was mayor of the Philippines city of Davao he shot criminal suspects himself.

Opposition to the killings and the proposed return of the death penalty is coming from the Roman Catholic Church. About 86 percent of the Philippines' 100 million residents are Catholic, according to the Asia Society's Center for Global Education.

Catholic Archbishop Socrates Villegas said that the killing of people by the government goes against the church's teachings.

The United Nations said that, as of 2014, 160 nations had banned the death penalty. In the past two years, Bangladesh, Fiji, Madagascar and Suriname stopped executions, the UN reported.

Executions Down in United States

In the United States, 20 people have been put to death for their crimes in 2016, the lowest number in 25 years. The number comes from the Death Penalty Information Center, a non-profit organization.

Death penalty supporters say that people found guilty of horrible crimes should be put to death. They believe the sentence will act as a deterrent. By deterrent, they mean it might cause someone to decide against killing someone else.

But opponents argue that a moral society does not put people to death. They say sometimes innocent people are found guilty of crimes. Once a person is executed, such mistakes cannot be fixed, death penalty opponents say.

encourage - v. to make someone more determined, hopeful, or confident

vigilante – n. a person who is not a police officer but who tries to catch and punish criminals