Update Required To play the media you will need to either update your browser to a recent version or update your Flash plugin.
By Bryan Lynn
14 December 2022


A new art project in Nigeria is centered on the still missing victims of a 2014 mass kidnapping in the town of Chibok, Borno state. Militants raided a government-run school for girls there and seized many students.

The militant group Haram captured 276 teenage girls in all. About 160 of them have been released, some after years of captivity. 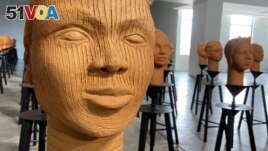 So, French artist Prune Nourry decided to use art to increase public knowledge about the missing girls. She named the project "Statues Also Breathe." It is on display at an art center in Nigeria's capital Lagos.

Students from across the country created the statues.

Nourry collected pictures of the missing girls from their families. She then passed the images along to university students. They sculpted the pieces at an event at Obafemi Awolowo University, in southwestern Nigeria.

Some of the former hostages from the kidnapping also took part, as did some parents of the missing students.

Nourry told Reuters news agency it was a good way for people who have long felt useless to do something to finally help the missing women. "The fact of being able to at least give a little thing through sculpture, through what we know how to do, was healing," she said.

Habiba Balogun oversees the Bring Back Our Girls campaign in Lagos. She told Reuters the missing women "have been in distress for eight years."

Balogun said she is pleased that a project had been created to "elevate" the issue. She hopes it can serve as, in her words, "a permanent record in the history of our country about something tragic like this"

clay – n. an earthy material that is sticky and easily molded when wet and hard when baked

display – n. a setting or presentation of something in open view

distress – n. the feeling of being very upset or worried

elevate – v. to be given a more important position