Update Required To play the media you will need to either update your browser to a recent version or update your Flash plugin.
By Gregory Stachel
30 June 2022


In April, Indian Prime Minister Narendra Modi said India was ready to increase exports of wheat to "feed the world."

The South Asian nation was looking back on five straight record wheat harvests.

However, high heat that decreased wheat production and the highest inflation in eight years led to a change in policy for the nation of 1.4 billion people. 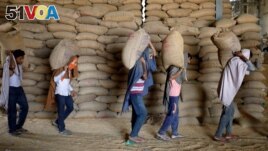 FILE - Workers carry bags of wheat for sorting at a wheat processing center, or grain mill, outside of Ahmedabad, India on May 16, 2022. (REUTERS/Amit Dave/File Photo)

One government official, who asked to not be identified, said Modi's office ordered a stop to wheat exports because of high inflation. Inflation was in part what caused the toppling of the Congress Party government in 2014.

India is one of at least 19 countries that have introduced food export restrictions since the war in Ukraine began.

Violent protests have started in some developing nations as international trade in several agricultural products decreases.

Countries including India, Indonesia, Argentina and Serbia have imposed restrictions. Economic damage caused by the COVID-19 pandemic, extreme weather, and supply chain problems have threatened many places with hunger.

The United Nations World Food Program (WFP) said in April that the number of people facing severe food insecurity had doubled since 2019. The WFP estimates that 276 million people in the 81 countries in which it operates are at risk.

Now, as exports from two major agricultural producers are affected, the WFP predicts that number will increase by at least 33 million.

World Trade Organization members can ban or restrict exports on food or other products if the move is temporary and is needed to relieve "critical shortages."

India's Commerce Minister Piyush Goyal told Reuters last month that he had been in contact with the WTO and the International Monetary Fund (IMF). He said India needed to explain that it has to deal with food security, prices, and hoarding.

Michele Ruta is an economist with the World Bank Group. He said export restrictions risk worsening the rise in world food prices. He said restrictions produce a domino effect as a deepening crisis causes other countries to take similar steps.

Many economists said the world food crisis is already more severe than the last one in 2008.

Simon Evenett is a professor of international trade and economic development at the University of St. Gallen in Switzerland. He said, "This time around that is harder to do as we do have a supply hit here in both Ukraine and Russia." He said the size of summer harvests in major food producers would help predict how the situation develops in the second half of 2022.

Information from the U.S. Department of Agriculture shows that Ukraine and Russia provided 28 percent of world wheat exports, 15 percent of corn exports, and 75 percent of sunflower oil exports in the 2020 to 2021 season.

topple – v. to remove (a government or a leader) from power

supply chain – n. the systems and organization involved from manufacturing a product to providing it to a buyer

relieve – v. to reduce or remove (something, such as pain or an unpleasant feeling)

domino effect – n. a situation in which something, usually bad, happens and causes other similar events to happen

sunflower – n. a tall plant that has very large yellow flowers and that produces seeds which can be eaten