Update Required To play the media you will need to either update your browser to a recent version or update your Flash plugin.
By Dan Friedell
29 June 2022

Last week, the international swimming group, FINA, announced a rule that would bar most transgender women from competing. The measure requires transgender people to have begun their transition medically before the age of 12.

A transgender woman is a person who was born with male sex organs but identifies as female. 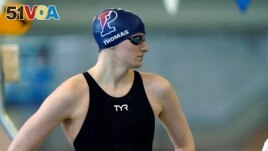 FILE - Transgendered athlete Lia Thomas of the University of Pennsylvania at the NCAA Swimming and Diving Championships, March 17, 2022, in Atlanta. Under FINA's rule, Thomas is not eligible to compete in international event. (AP Photo/John Bazemore)

Some transgender people take medicine to lower their male or female hormones. The hormones greatly affect how the body develops.

After FINA announced its decision, other organizations followed.

The organizations that run field hockey, rugby, triathlon and cycling are making new rules or updating old ones.

FIFA, the international soccer organization, also said it is reexamining its rules on gender.

The International Olympic Committee, IOC, said late last week that it would not make a decision on the issue. An IOC spokesperson said that the organization "can't come forward with one rule, one short rule that fits everybody."

The group said such action is the responsibility of individual federations and individual sports.

A past Olympic policy permitted transgender women who had been on hormone therapy for at least 12 months to compete with women.

The group that runs track and field competitions, known as World Athletics, is run by former Olympic gold medalist Sebastian Coe of Great Britain. Coe said World Athletics would examine its policies on transgender and intersex athletes by the end of 2022.

If World Athletics follows the FINA rules, it could also keep runners Caster Semenya of South Africa and Christine Mboma of Namibia from competing. Both are top runners who race against women but have sex development differences that result in higher levels of testosterone than most women.

Ross Tucker is a researcher for World Rugby. By the end of the year, he said, "(World Athletics) will have announced a policy that is very similar to swimming ... and they will say that if ever a person has gone through male puberty and has obtained the advantages associated with testosterone, they can't compete in women's sports."

Tucker also noted that it is likely all of the sports groups will face legal challenges to their new rules. The court costs may prevent other smaller sports groups from making new policies that follow FINA.

Coe said FINA spent $1 million in legal costs to create the new rule. He said World Athletics also has money to deal with court cases, but smaller sports organizations may not.

The gender of an American swimmer was in the news during the recent college national championships. Lia Thomas is a transgender swimmer who attended the University of Pennsylvania. She started hormone therapy while in college, which means she entered male puberty and started to build muscle like a male. She competed in college swimming against men for three years.

Thomas won multiple events at the Ivy League women's championships in early 2022 and then won the national 500-yard race in March. Some swimmers were upset they lost to a swimmer who until recently competed as a man. Thomas said she wants to try to make the next Olympics, in Paris, in 2024.

USA Swimming has a policy that says swimmers competing in women's events must be able to show a low level of testosterone for at least 36 months. When the 2021-2022 school year started, Thomas had only been doing hormone therapy for about two years.

The NCAA, the organization that runs college sports in the U.S., did not have the USA Swimming policy in place this year. Thomas would not have been able to swim if it had.

When FINA made its announcement, USA Swimming said it will take time to understand the possible effects of the rule on its own policies.

Tucker, the rugby analyst, said the news surrounding Thomas seems to be the main reason for the new FINA policy. Before Thomas made the news and expressed an interest in the Olympics, there were few transgender athletes good enough to win events against top competition. He said people do not know how they feel about an issue until they are forced to deal with it directly.

"Lia Thomas made this real," he said.

Based on her recent times, Thomas would qualify for the U.S. Olympic Trials, which are set for June 2024.

Olympic sports leaders met in Colorado last week on the 50th anniversary of the U.S. law known as Title IX. That law bans sex discrimination in any education program or activity that receives federal money.

Susan Lyons, a leader of the U.S. Olympic and Paralympic Committee, USOPC, said it is not the group's job to set a transgender policy. But she said the organization should present a clear "point of view."

There are over 40 international sports organizations that will at some point need to make rules.

Lyons said no one is "begging" the USOPC to make a statement. "But on the other hand, we're the leaders of the Olympic movement in the U.S., so we have to have a point of view." She said it is not likely everyone will agree with the USOPC's opinion.

Also last week, President Joe Biden's administration proposed new rules that would protect lesbian, gay, transgender and queer students from discrimination under Title IX. Miguel Cardona, the head of the Department of Education, said "standing up for equal access and inclusion is as important as ever."

transgender– n. a person who believes their true identity is the sex other than the one they were at birth

athlete– n. a person who is trained or good in sports

transition– n. a change from one state to another

hormone replacement therapy – n. the process of taking medication that reduces or increases the amount of a substance in the body that influences growth and development

medalist - adj. a person who receives a medal or award

intersex – adj. a way to describe a person whose sex organs are not traditionally male or female

obtain – v. to get or acquire

advantage – n. something that helps to make someone better

associate – v. to be connected with something

testosterone – n. a hormone produced in large amounts by men responsible for the development of male features such as facial hair, muscle and the ability to create sperm

yard – n. the unit of measure equal to three feet or just less than one meter

point of view – n. a way of thinking about something

access – n. a way of getting to use or do something