Update Required To play the media you will need to either update your browser to a recent version or update your Flash plugin.
By Dan Novak
27 June 2022


Russia is carrying out a major offensive on the last Ukrainian stronghold in the eastern Luhansk area. The local governor said Russian troops are "pouring fire" on the city of Lysychansk from the ground and air. 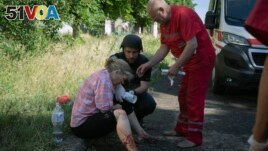 A police officer and paramedic give the first aid to a woman wounded by the Russian shelling in city center in Slavyansk, Donetsk region, Ukraine, Monday, June 27, 2022. (AP Photo/Efrem Lukatsky)

"After the takeover of Sievierodonetsk, the enemy army has concentrated all its forces on capturing (our) last stronghold in the Luhansk region: Lysychansk," Haidai told The Associated Press.

Over the past week, the Russian army has captured several villages and towns southeast of Lysychansk. It is launching air strikes and artillery fire from those towns.

The office of President Volodymyr Zelenskyy said at least six civilians were killed and 31 others injured during Russian attacks on several cities in the past day. Kyiv and some cities in the south and east also came under attack.

In Lysychansk, at least five buildings in the city and the last road bridge were damaged over the past day, Haidai said. An important highway connecting the city to government-held territory further south could not be used because of shelling. But the highway has not been captured yet, he said.

The fighting is also making the evacuation of civilians more difficult, Haidai said. The city had a pre-war population of around 100,000, about half of whom remain.

Lysychansk is on the Siverskiy Donets River and is a large area covered with hills. This gives an advantage to Ukrainian troops, military experts say.

The Siverskiy Donets River borders Lysychansk on the north and east. The Ukrainian army continues to hold territory west of the city which it uses to supply arms and humanitarian aid. Russian forces have now moved to block Lysychansk from the south.

To the west, in the government-controlled city of Sloviansk, local officials accused Russian forces of using a cluster bomb Monday. They said it hit a civilian neighborhood. A cluster bomb is a kind of explosive that contains many smaller bombs and is considered very deadly.

Officials say the number of dead and injured has not yet been confirmed.

The shockwave from a big explosion Monday in Sloviansk destroyed most of the windows in the surrounding apartment buildings and nearby cars.

Meanwhile, leaders of the Group of Seven countries meeting in Germany appeared willing to provide Ukraine with air defense systems. Russia hit Kyiv with long-distance missiles on Sunday. The U.S. appeared ready to announce the purchase of a surface-to-air missile system for Ukraine.

stronghold — n. a protected place where the members of a military group stay and can defend themselves against attacks

concentrate –v. to cause attention, effort or strength to be used or directed in one place

evacuate — v. to remove someone or to be removed from a dangerous place

apartment building –n. a large building with several or many separate living areas within it

advantage — n. something that helps or puts a person or group in a good position

shock wave — n. a movement of high pressure air that results from an explosion