A Somali Boy’s Search for Food

Update Required To play the media you will need to either update your browser to a recent version or update your Flash plugin.
By Ashley Thompson
25 June 2022


Each morning in the Somali border town of Dollow, 11-year-old Bashir Nur Salat plans for his day's mission behind a wire fence. He eyes his prize through the barrier: lunch.

The worst drought in 40 years in war-torn Somalia forced Bashir's family to leave their farm three months ago. They moved about 100 kilometers north to Dollow. The town is on the border with Ethiopia.

Bashir lives in a place where three major crises are coming together: climate change, rising food prices and war. 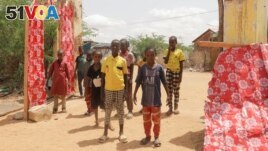 Bashir Nur Salat poses for a photograph with his classmates at the Kabasa Primary School in Dollow, Gedo Region, Somalia May 25, 2022. (REUTERS/Feisal Omar)

Today, he leads a group of younger children who gather at the fence of Kabasa Primary School. They arrive when the school begins serving its students food. Many in Bashir's group were among the latest group of people arriving in Dollow. They arrived too late in the year to register for schooling.

Through the fence, the children watch as students inside eat warm food provided by a United Nations-supported program. The program provides one of the few dependable sources of food in the town.

One by one, the children make their way through a broken part of the fence. They run across the schoolyard and quickly take a meal when they do not think the teachers are looking.

"When I don't get food, I'm so hungry: I lie down and I can't sleep," Bashir said quietly. His eight brothers and sisters at home were all hungry, too, he added.

No time to recover

The drought began last year. One-third of farm animals in the country are already dead from thirst or hunger. Crops and fruit trees have dried out.

Somalia needs to import more food but people cannot afford to buy it. Foreign aid is decreasing and food prices are rising quickly because of the war in Ukraine, the world's fourth-largest grain exporter.

The U.N. warned this month that more than a third of Somalia's 16 million people need food aid to survive. Some areas could face famine this month. Aid in some places will end in June.

Bashir's family had never before left their home in south-central Somalia, even when the famine in 2011 killed more than 250,000 people. Aid workers say deaths may get close to those levels again from this drought.

Bashir's family did not have to move then. Some livestock survived, so they stayed on their farm.

Not this time. The drought killed all of their 12 cows and 21 goats.

"I've never seen a drought like this before," said Bashir's 30-year-old mother.

Such situations are set to become more common in Somalia. Rising temperatures are expected to fuel more natural disasters, many scientists say. In the last 50 years, extreme weather events have increased by five times, according to the U.N.'s World Meteorological Organization, or WMO.

The Horn of Africa, including Somalia, is at its driest on record. This year's March-to-April rains – the first of two yearly rainy seasons - have been the smallest in 70 years. The second rains from October to December are also predicted to be unusually dry.

The El-Nino-La Nina weather cycle halfway across the world in the Pacific is partly influencing the warm, dry air over Somalia.

Ocean warming may also be playing a part. Climate scientist Abubakr Salih Babiker of the WMO Regional Office for Africa said the Indian Ocean is among the fastest-warming water bodies in the world.

With oceans taking in much of the increasing atmospheric heat, scientists believe warming Indian Ocean waters may be evaporating and raining down more quickly over the ocean before reaching the Horn of Africa. This leaves dry air to spread across the land.

Another cause is rising air temperatures. In Somalia, temperatures have increased an average of 1.7 degrees Celsius from the pre-industrial average. That is greater than the worldwide average of 1.2 degrees, said Babiker. Warmer air speeds up evaporation from soil and plants.

Dollow's hospital is full of tired, weak patients in its children's area. Every bed was taken when Reuters reporters visited in May. Weakened by severe malnutrition, some children had serious infections, including measles.

At the school where Bashir hunts for food, 10-year-old Suleko Mohammed says she lost two brothers and a sister to measles in six weeks. Her two brothers were 2 and 3 years old. Her older sister, she said, used to help her with homework.

Down the road, market areas offered fruits, beans and bags of flour and wheat. But the foods were too costly for many to consider buying. Food prices have jumped by up to 160 percent in parts of Somalia following the drought and the conflict in Ukraine.

The government is concerned by what it says is the slow international aid assistance. Somalia's special drought envoy Abdirahman Abdishakur Warsame said countries need "to pay attention to this drought before it becomes a famine."

"All human lives are equal," he told Reuters. "The international community, particularly the Western nations, are paying more attention to Ukraine than the other crises."

Dollow is better served by aid agencies than most Somali towns. The Kabasa Primary School was established to help with the growing number of arriving families who were harmed by the 2011 famine.

About one fifth of students leave school during hard times and never return, said Rania Degesh. She is deputy director of East and southern Africa for the United Nations Children's Fund (UNICEF).

The meal program helps keep children in school. The U.N.'s World Food Programme says schools in Somalia get 41 U.S. cents per child for two meals a day. But the program which supports 110,000 Somali children has been forced to make cuts. Schools have just started a two-month break. There is no funding for when classes restart in August.

Teachers said Bashir and his group of children were among at least 50 unregistered children who appeared daily hoping for meals. Sometimes, teachers pushed them back. Sometimes, they offered leftovers.

"If they eat the food, then there is not enough for the students," said Kasaba's principal, Abdikarim Dahir Ga'al.

Ga'al watched Bashir and the others sneak into the schoolyard. He acted like he did not notice. It was the last day of the school term.

Outside, Bashir walked back toward the fence. He had a metal plate of beans and corn. His smile was wide, and he held his head high.

At last, he would eat.

drought - n. a long period of time during which there is very little or no rain

livestock - n. farm animals (such as cows, horses, and pigs) that are kept, raised, and used by people

famine - n. a situation in which many people do not have enough food to eat

sneak -v. to move quietly and secretly in order to avoid being noticed