Update Required To play the media you will need to either update your browser to a recent version or update your Flash plugin.
By Christopher Cruise
07 October, 2014


The conflict in South Sudan is harming relations between the government and international organizations. Aid groups are helping the millions of South Sudanese who need food, shelter or medical care. And some government officials believe aid workers are doing jobs that locals could do.

Last month, South Sudan's labor minister told all foreign workers in the country to give up their jobs by October 15. Some people believe he was ordering foreigners to leave the country. Foreign aid agencies, diplomats and businesses have been helping the South Sudan government since before the country declared independence in 2011. They have worked with the government to provide basic services like healthcare and education.

The international community criticized the minister's comments, and the government quickly cancelled the order. 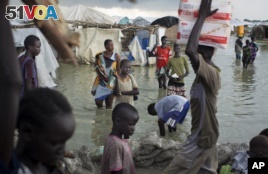 Displaced South Sudanese walk through flood waters in a camp for the displaced at the United Nations Mission in South Sudan (UNMISS) base in the town of Bentiu, South Sudan Monday, Sept. 22, 2014. (AP Photo/Matthew Abbott)

Paul Kumbo is South Sudan's director-general for information. He says the minister's statement was misunderstood.

"Some NGOs have taken it wrongly and then they try to blame the government that they chasing the foreigners [away], which is not true."

Mr. Kumbo says relations with foreign workers and aid groups are strong. But he believes more jobs should be given to South Sudanese.

"In any country there are certain positions, like a receptionist, do you need to bring somebody from America to become a receptionist in your office? What about the locals? The nationals? This is the type of work that can be given to the locals."

Many foreigners in South Sudan's capital city, Juba, did not believe the order would take effect. But they say it does demonstrate a feeling of growing insecurity from the government. One Western diplomat said South Sudan's goal is not to expel the foreign workers, but to control them.

To reach that goal, South Sudan's national assembly is considering a bill to increase supervision of international organizations. Some observers say the proposal would give the government too much power, which could be abused.

Tensions between the two sides have increased over the past 10 months. South Sudanese forces are fighting rebels who have taken control of important parts of the country. Relations worsened in March when South Sudanese officials found weapons in United Nations vehicles traveling to Unity state. Rebel forces and UN peacekeeping troops are both operating in the area. The UN force is not permitted to ship weapons by road. It later apologized.

Nhial Tiitmamer is a researcher with South Sudan's Sudd Institute. He says a breakdown in communications during incidents like this is partly to blame for the poor relations.

A major issue is the desire of aid groups to operate in areas under rebel control. In those areas, many people are displaced and need humanitarian aid. Toby Lanzer leads UN humanitarian aid efforts in South Sudan. He says relations with the government are the worst he has seen.

"I've been here now for over two years and I haven't seen the relationship between the government and international institutions or even embassies or non-governmental organizations be as challenging as it has over the past few months."

Toby Lanzer says he understands that the government is under pressure to end the rebellion. And he says he knows South Sudanese officials are not happy that aid groups are working in areas under the control of rebel forces.

"The deeper issue here is how do you maintain a constructive relationship in situations of internal conflict when you need to be working with all authorities, wherever they are, whether they are part of the government per se or an authority which has established itself where the government is no longer present."

Ten thousand people have been killed since the conflict began 10 months ago. More than 1.5 million others have been displaced. Many of them now live in UN refugee camps.

relations – n. the way in which two or more people, groups, countries talk to, behave toward and deal with each other

cancel – v. to cause (something) to end or no longer produce a certain effect; to stop (something) from being effective or valid

diplomat – n. a person who represents his or her country's government in a foreign country; someone whose work is diplomacy

abuse – v. to treat in a harsh or harmful way

apologize – v. to express regret for doing or saying something wrong; to give or make an apology