You are never too old to try to make your dreams come true.

This could be Mary Moe's motto -- the expression that best captures her spirit. Mary Moe has done a lot during the past 91 years. For much of that time, she wanted to fly, but never had the chance – until now.

She recently achieved her life-long dream. 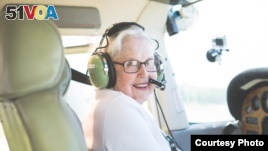 Mary Moe may look like an average grandmother. But she is not.

Mary just learned how to fly an airplane, a dream she has had since she was a little girl. 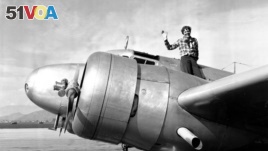 Growing up, she was inspired by two American pilots: Charles Lindbergh and Amelia Earhart. They became her inspiration. Lindbergh made the solo nonstop flight across the Atlantic Ocean in 1927. Five years later, Earhart became the first woman to make the flight.

But Mary Moe could not find time to make her dream come true. At age 34, she was just too busy – busy fighting cancer. She was also busy with her job in advertising and busy raising her family.

There was simply no time to think about flying a plane. And it was difficult for her to drive to the airport. Lessons were costly. Everything seemed to be working against Mary.

"I had actually gone out to that airport in the '80s to see about flying lessons and it was such a long drive out and expensive and I thought, ‘No, I have to put this on the back burner for a while.'"

So her dream had to wait. She kept it on the back burner.

Then, at age 91, her wish finally came true.

Sally Webster works for the group. She told VOA on Skype that Ms. Moe's wish is one of hundreds they receive each year.

"Based on funding year by year, we are able to grant about 200 to 250 wishes per year. Although 65 (years old) is our lower age limit, our average wish recipient's age is 82."

The wishes are as different as American society.

"For example, a World War II veteran, he was one of the first troops to land on the beaches of Normandy on the D-Day invasion. And he had not been back since that battle. So we were able to send him back for the 70th anniversary."

Wish of a Lifetime helps older people, senior citizens, enjoy a dream. It also sends the message that it is never too late for a dream. But Ms. Webster says it also wants to send another message to society.

"You know, our bigger vision as an organization is to really change the way that our society feels and thinks about aging and the elderly. So we really try to look for those stories that are inspiring and can show people that older Americans can achieve things just like younger Americans can."

Susie Danick also believes in this goal. She founded TAD Relocation, a business that helps senior citizens when they move. Ms. Danick gave $5,000 to the Wish of a Lifetime to help seniors realize a dream. Mary Moe was one of them.

She received three flying lessons. And on the big day of her first flight, her family and friends all came out to cheer her on. Also at the airport was Ms. Danick. Mary's success made everyone around her excited and proud.

"She was just exhilarated and so happy. And her family was so excited to be a part of it. Her great-grandchildren were so excited to see their great-grandma up in the plane laughing and smiling. It was just a great event, a great day."

Flying teacher David Waksberg flew with Ms. Moe during her second lesson. He says she was very calm.

"She was very calm, which is always important when you're flying. Sometimes people get to be overstressed, which I get. It's a stressful environment. You need to do a lot of stuff at the same time."

But Mary says she enjoyed every second.

"It was very satisfying and I thought, 'Oh, to get down on the road and drive a car is just misery.' This is the way everybody should go. So I was really, really happy to be up there."

The new pilot says it is never too late to spread your wings and try something new.

to put something on the back burner – idiom. not getting or needing immediate attention.

calm – n. a quiet and peaceful state or condition; v. to become or to cause (someone) to become less upset, emotional, excited; adj. not angry, upset or excited

collaboration – n. the action of working with someone to produce or create something. collaborate – v. to work jointly with others or together especially in an intellectual endeavor