US Troops Help to Fight Ebola in Liberia

Update Required To play the media you will need to either update your browser to a recent version or update your Flash plugin.
By Christopher Cruise
01 October, 2014


In recent weeks, many world leaders have called for immediate action against the Ebola virus in West Africa. The United States has answered the call. It has promised the most money -- almost $200 million – to fight Ebola. And it is sending 3,000 troops to Liberia to help build medical centers where people infected with the virus will receive care. It will be the largest U.S. military operation in Africa since American troops left Somalia in 1993. Voice of America was in Liberia's capital, Monrovia, when the first US troops arrived.

Petty Officer Holsinger spoke to VOA from in front of Liberia's international airport, named Robertsfield. Thirty minutes earlier, heavy machinery began preparing the area where he and other soldiers will build a 25-bed hospital. The medical center is supposed to be for health workers infected with Ebola.

"Our biggest concern with this area is drainage. If you have too much water in your area with your tents, it can cause a lot of problems with insects, maybe snakes, and it's just all in all, I don't think anybody really wants to live in water."

Petty Officer Holsinger is based in Djibouti, thousands of kilometers from Liberia, on the Gulf of Aden. Djibouti is home to the only U.S. military base in Africa. 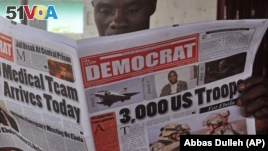 In addition to sending troops to Liberia, President Barack Obama said the U.S. government will provide $175 million to fight against Ebola. The United States will also build 17 new health care centers in West Africa. These centers will have up to 100 beds each. They also will train as many as 500 healthcare workers every week.

As the first U.S. troops arrived in late September, Liberians had mixed feelings. They were both happy and concerned. Macosty Tmba is one of them.

"Well, seeing them is like sometimes happiness, sometimes not. I don't know. I don't know the bad guy, their real mission here because I overheard that they're here for them to fight, to help the Ebola virus in this nation. So seeing them, sometime we are pleased for us to see the U.S. Army in this country for them to help to fight the Ebola virus."

General Darryl Williams leads the American humanitarian military operation in Liberia. He says he believes Liberians generally like Americans, but he says the U.S. troops might not be welcome. He says his soldiers understand that and are prepared for it.

A lack of information about the virus led to its spread in Liberia, Sierra Leone and Guinea, where the first cases were reported in December. Many people do not know the virus can spread only through contact with bodily fluids of those who are infected.

Part of the fight against Ebola involves getting information to people who are suspicious of foreigners trying to help. In Guinea last month, angry villagers attacked a group of healthcare workers and reporters. Several people were killed. The villagers reportedly were worried that the group was infecting them with Ebola.

Colonel Brad Johnson is leading the effort to expand Robertsfield airport. His goal is to make sure that the supplies Liberia needs to fight Ebola can be provided quickly throughout the country. He says Liberia and the United States are united by a long friendship, history and by a common language, all of which make the fight against Ebola easier.

"We got an awesome relationship with the airfield manager here, which has really made this kind of a ... it should bring the two gears together, it has kind of brought them together real well. And so that's, and so things as we ramp up operations, we'll work through those challenges and I think will be highly effective moving forward."

Ebola has infected more than 5,600 people this year. The disease has killed more than 2,800 people, mainly in Guinea, Liberia, and Sierra Leone. The World Health Organization warns that the number of people infected with Ebola could grow at what it calls an "explosive" rate. It says 20,000 people could be infected by November unless more efforts are made to quickly control the outbreak.

*This story was reported by correspondent Benno Muchler in Monrovia, Liberia. Christopher Cruise wrote it for Learning English. George Grow edited it.

immediate – adj. without delay; very near in time or place

arrive – v. to come to a place, especially at the end of a trip

unite – v. to join together

common – adj. usual; same for all ("a common purpose")