Update Required To play the media you will need to either update your browser to a recent version or update your Flash plugin.
By Christopher Jones-Cruise
22 November, 2017

Mladic was found guilty of genocide, war crimes and crimes against humanity for actions during the conflict in the former Yugoslavia during the 1990s.

The court found him guilty on 10 of the 11 charges he faced, including persecution, extermination, murder, terror and unlawful attacks on civilians. He was sentenced to life in prison. 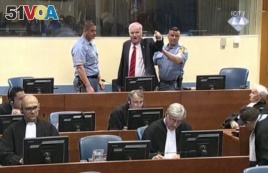 The court said Mladic tried to destroy the Bosnian Muslim population in the town of Srebrenica. And it said that, in Sarajevo, he personally directed a campaign of shelling and sniping meant to spread terror among civilians.

It noted that Mladic had talked about a desire to create an ethnically homogenous Bosnian Serb republic.

Mladic was in the courtroom on Wednesday, but was not present when a judge started reading the court's findings. He asked to go to the restroom for five minutes, but did not return for 45 minutes. His lawyer said Mladic's blood pressure was dangerously high. He asked the judge to either stop reading the verdict or go straight to the judgment. When the judge refused, Mladic began shouting until he was removed from the courtroom.

Zeid Ra'ad Al Hussein is the United Nations' human rights chief. In a statement, he called the court's ruling a "momentous victory for justice" and the "epitome of what international justice is all about." He also said the "verdict is a warning to the perpetrators of such crimes that they will not escape justice, no matter how powerful they may be nor how long it may take."

Mladic is the last former military leader to face war crimes charges in the court, which was set up to deal with the crimes that took place during the Bosnian war. The fighting lasted from 1992 until 1995, when the Dayton Peace Accord was signed. The agreement kept Bosnia as one country divided into two parts: the Serb Republic and the Bosnia-Croat Federation.

Mladic was charged with leading sniper campaigns in Sarajevo and with the 1995 killings of more than 8,000 Muslim men and boys in Srebrenica.

In 1995, at the end of the war, Mladic lived in Serbia, protected by family members and members of security forces. Many Serbs consider him to be a war hero. He was able to avoid arrest for almost 16 years. He was arrested at the home of a family member in rural northern Serbia in 2011. He has been in jail for more than five years.

Radovan Karadzic was the political leader of the Bosnian Serbs. In March, 2016 he was found guilty of war crimes and sentenced to 40 years in prison.

persecute – v. to treat (someone) cruelly or unfairly especially because of race or religious or political beliefs

exterminate – v. to destroy or kill (a group of animals, people, etc.) completely

snipe – v. to shoot at someone from a hidden place

homogenous – adj. made up of the same kind of people or things

epitome – n. a perfect example; an example that represents or expresses something very well

perpetrate – v. to do (something that is illegal or wrong)