Update Required To play the media you will need to either update your browser to a recent version or update your Flash plugin.
By Anne Ball
09 January, 2015


French officials say two armed suspects in the deadly attack at a Paris newspaper have been killed. The two are reported to have died during a police raid northeast of Paris. Officials say police rescued a hostage from the suspects during the raid.

Separately, police killed another gunman who was holding hostages at a kosher supermarket in Paris. But at least three died in that operation.

Explosions and gunfire sounded as police moved in both on the market and on Dammartin-en-Goele, a town near Charles DeGaulle airport. 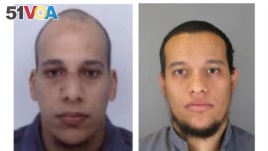 French officials say brothers Cherif and Said Kouachi were wanted in the attack earlier this week at the offices of the newspaper Charlie Hebdo. Reports say the two men had been hiding inside a warehouse in the town. They came out and began firing as police moved toward the building.

In Paris, security forces raided the supermarket and killed the gunman, who was holding hostages. Officials say there had been "at least five hostages," and that three were killed. But it was not clear who killed them or when.

A police official identified the suspected gunman in the store as 32-year-old Amedy Coulabaly. He is believed to be the same man who shot and killed a policewoman south of Paris on Thursday. French officials are seeking a woman who was said to be helping the suspect.

Police reports have linked Amedy Coulabaly to the Charlie Hebdo attack. The Kouaci brothers are suspected of killing 12 people there with high-powered weapons.

Before the raid in Dammartin-en-Goele, French security forces said they were in contact with the brothers.

More than 88,000 police and security forces had been searching for the two men. A third suspect in the Charlie Hebdo shootings, 18-year-old Hamyd Mourad, surrendered to police on Wednesday. His connection to the gunmen remains unclear.

In the attack on Thursday, a policewoman was shot and killed while responding to a traffic accident.

"Right now, we have to do everything to ensure the protection of our citizens." That is what President Francois Holland told government officials at a meeting at France's Interior Ministry. The Reuters news service reported his comments.

As a safety measure, police on Friday also ordered the closing of all businesses in the Jewish Marais neighborhood of central Paris. The area is about a kilometer from the offices of Charlie Hedbo.

Both Kouachi brothers reportedly had links to Islamic extremists. The New York Times newspaper reports that Said Kouachi received terrorist training in Yemen in 2011. His brother Cherif once served prison time for his involvement with suspected terrorists.

Hundreds of French nationals have gone to Iraq and Syria to join jihadist fighters.

Also Friday, the French newspaper Liberation made room for the surviving Charlie Hebdo journalists to prepare for their next edition. Charlie Hebdo is known for making fun of all religions, including Islam. The cartoonists and writers have returned under heavy police protection, Reuters reported. 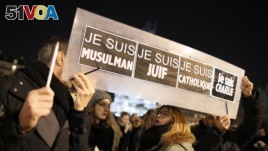 People hold a placard which reads "I am Muslim, I am Jewish, I am Catholic, I am Charlie" at a vigil, following the shooting at the satirical newspaper Charlie Hebdo, Jan. 8, 2015.

Mourning continues for those killed at the satirical magazine, and for two policemen who were among the dead.

Parisians stood in silence in a cold rain Thursday. They held up pens and pencils as a sign of the right to free speech. The lights of the Eiffel Tower were turned down Thursday night to honor the victims.

The United Nations Security Council held a moment of silence before its meeting Thursday.

This report was based on a story from reporter Lisa Bryant in Paris and material from The Associated Press, AFP and Reuters. Anne Ball wrote it for VOA Learning English. George Grow was the editor.