Update Required To play the media you will need to either update your browser to a recent version or update your Flash plugin.
By Bryan Lynn
26 November 2020


A mother of five children in Gaza is the Palestinian territory's first woman taxi driver.

Thirty-nine-year-old Naela Abu Jibba says she likes her job although some people make fun of her for doing it.

"I get lots of offensive (social media) comments," she recently told Reuters news agency. "But the encouraging comments are far greater."

Abu Jibba says some of the negative comments target her driving abilities.

"Some say this is a job for men, others say we cause accidents, when the fact is, women are calmer and more careful drivers than men," she said. 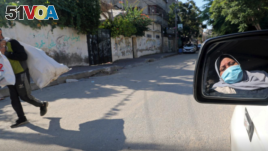 Palestinian woman Naela Abu Jibba, who started a women-only taxi service in the Gaza Strip, is reflected in a mirror as she drives her vehicle at Beach refugee camp in Gaza City on November 17, 2020. (REUTERS/Mohammed Salem)

Abu Jibba only takes women in her taxi. They must request service ahead of time. Many tell her they feel calmer being driven by her than men.

"When a woman exits a hair-dresser shop - going to a party dressed and wearing makeup - she feels better riding with a woman," she said.

Abu Jibba studied and got a degree in community service. But she decided to start her taxi business after failing to find work in her field.

She drives a white Kia vehicle and wears a top showing the name of her taxi service - Al-Mukhtara – which means chieftain in Arabic.

Abu Jibba says she hopes to expand her business once the COVID-19 pandemic passes. The health crisis has led to big reductions in travel and social activities in Gaza. The territory of two million people has reported more than 12,000 virus cases and at least 56 deaths.

Abu Jibba says she dreams of, one day, owning a whole Al-Mukhtara fleet.

Reuters reported on this story. Bryan Lynn adapted the report for VOA Learning English. Mario Ritter, Jr. was the editor.

encourage – v. to make someone more hopeful and sure of themselves

chieftain – n. chief, the head or leader of a group

fleet – n. a group of vehicles that work together and are controlled by one owner or company